The Manics made one of their frequent visits to the Civic, a venue they’ve always enjoyed playing, as part of their short UK tour to celebrate the 20th Anniversary of the release of one of their most important albums, The Holy Bible, which was also the last album on which guitarist Richey Edwards played. As the Civic began to fill up before the show, attention was focussed on the stage set, where almost every surface was wreathed in camouflage netting, lighting rigs, back wall, back line, monitors, the effect was that of a military post in a jungle clearing.

There was no support on the night, each gig apparently featuring a DJ, although there was no chat between the music that was played. The last song before the band were due on was Sabbath’s mighty ‘War Pigs’, and, cleverly, the house lights went down and the music switched off as Ozzy intoned the line “Now that God has struck the hour….” With the stage almost in darkness, Ozzy was replaced by the Chemical Brothers remix of ‘Faster’ until the band walked on stage, James Dean Bradfield announced “Hello. We are the Manic Street Preachers and this is the Holy Bible”, and we were off, the first half being a run through of the full album.

Unlike most of the band’s live work in the last few years, they played this opening set as a trio, with, as ever, Richey’s space stage right left empty. For all the passion of the lyrics, the opening couple of tracks, ‘Yes’ and ‘ifwhiteamericatoldthetruthforonedayit’sworldwouldfallapart,’ seemed a bit low key, almost easing the band into the show, but third track, ‘Of Walking Abortion,’ really raised the tempo and had some genuine bite and venom. It was interesting that while the band don’t usually make a big deal of Richey’s disappearance in their stage shows, there seemed to be more mentions of him than usual, often emphasising his importance in the writing and recording of The Holy Bible. Nicky Wire remembered playing the Civic on the original Holy Bible Tour with Richey, dismissing contemptuously the stories about his guitar not being plugged in, and for ‘This Is Yesterday’, Bradfield not only remembered that he and Richey felt that the album was so dark, they had to write a song that was a little brighter in tone, he also used the guitar that Richey had played when recording the album. It’s typical of the Manics that they choose to celebrate by playing through an album that’s not the easiest listen, with songs as lyrically bleak as ‘4st, 7lb’ and ‘She Is Suffering’,  although there are the odd crowd pleasers like ‘Faster’, but it was an intense and fascinating experience to hear all the tracks live, and it’s clearly something that meant a lot a lot for the band to do. 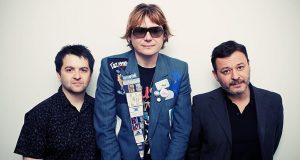 As the notes of the last track, ‘P.C.P.’ faded away, the band announced a short break, with Nicky Wire promising to come back and play some party songs, but the second half opened with James Dean Bradfield entering the stage alone to sing ‘The Everlasting’, accompanied only by a drum machine  and himself on acoustic guitar, but then the whole band came on the scene, as well as 2nd guitarist Wayne Murray and keyboard player Nick Nasmyth, who make up the band’s five piece touring line-up, and really turned the atmosphere up with a tumultuous ‘Motorcycle Emptiness’. While Nicky Wire had promised the party songs, the band had also announced their intention to play some songs rarely played, and they lived up to this promise early in the second half by including ‘Condemned To Rock’n’Roll’ a song from their first album, and tonight dedicated to Geezer Butler, who Nicky Wire had sat near to at a recent function and who he described as a fellow lyricist and bass player,  and ‘Removeables’, one of the lesser known tracks from ‘Design For Life’. Along with these there were several fan favourites, including a riotous ‘You Stole The Sun’, which had large parts of the crowd pogoing for all they were worth, and a furious ‘You Love Us’, which, echoing the previous Sabbath references in the show, James Dean Bradfield introduced with a few bars of ‘Crazy Train’

The show ended with ‘A Design For Life’, with the crowd in full voice and, as ever, there was no encore. Bradfield looked drained as he thanked the crowd with “Wolverhampton! The leylines of rock and roll run straight down the middle of this place. What a venue!” I don’t know how often he uses these words, but tonight they certainly rang true. A great show. Next year will be the twentieth anniversary of ‘A Design For Life’ and there’s already talk of the band playing a few shows based around a play through of the album. If that happens, count me in.

Set List:
The Holy Bible
1. Yes
2. Ifwhiteamericatoldthetruthforonedayit’sworldwouldfallapart
3. Of Walking abortion
4. She Is Suffering
5. Archives Of Pain
6. Revol
7. 4st, 7lb.
8. Mausoleum
9. Faster
10. This Is Yesterday
11. Die In The Summertime
12. The Intense Humming Of Evil
13. P.C.P.