Been on tour for most of the year? Having withdrawal symptoms of being in the UK? Of course the natural cause of action would be to whip up a chip butty, pour cup of tea and retire for an afternoon of watching the Coronation Street Omnibus to settle you back into the English culture… unless you’re Mallory Knox of course. Get back on that stage lads, Wolverhampton’s getting a bit rowdy. Mikey Chapman, put that OK magazine down.

Opening up the fourth night of Mallory Knox’s, ‘The Homecoming Tour’, are three piece band, The Xcerts, who ‘haven’t played here for an age’. It would hard to define this band with one genre while the crowd alternates from head banging to swaying around like epileptic octopuses. Each number further entices the audience as The Xcerts give the crowd a giggle with the odd cheeky gag; it’s clear to see that this band will be back to Wolverhampton soon as they are received well.

Barely distinguishable in amongst the fog of sweat hovering in the Wulfrun Hall this evening are Set It Off, a band who are greatly anticipated tonight judging by the reaction to frontman Cody Simpson’s ‘C’mon guys, you know the drill’. Although the band have practically the whole venue singing along, the reliance of a backing track for a group of such energised people is disappointing to say the least. ‘The Haunting’, ‘Bad Guy’ and ‘Why Worry’ stand out in between Simpson’s preachy comments about being free, which are laced with more cheese than a pot of macaroni made by a uni student. I mean we’re all for equality but c’mon dude, you sound Miley Cyrus pre the ‘wrecking ball incident’, can I just get in the pit yet? 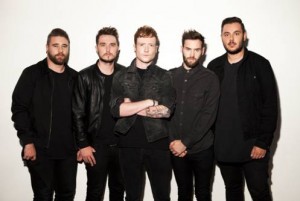 After an interesting countdown video introduction, Mallory Knox take to the stage to show the people of Wolvo a good time. The band storm into their best hits; ‘Shout At The Moon’, ‘Getaway’ and ‘Heart & Desire’, proving just how popular their latest album, Asymmetry, has turned out to be. The crowd tonight is more youthful than I first anticipated, and it serves as a reminder of how successful Mallory Knox are taking into consideration that they are only a few years older than the barrier hugging girls (and some boys) they stand in front of.

The crowd simply illuminates throughout the band’s Radio 1 hit, ‘Ghost In The Mirror’, shortly followed by,‘Glimmer’, which offers one of those moments at a gig when you really pause and lose yourself for a bit. ‘This is definitely our last song’ frontman, Mikey Chapman, winks before bouncing around to,‘Dare You’, showcasing his vocal chords that can only be described as liquid gold.

‘Mallory Mallory Mallory’ is chanted as the five guys return to Wolverhampton’s energised teenagers eager to hear the band’s slower song, ‘She Took Him to the Lake’. Ending with arguably their most well known song, ‘Lighthouse’, the band invite their fans to their after-show booze up before making a swift exit (although the majority of the crowd look as though they’ve already stopped up way past their bedtime to risk even catching a wiff of Vodka). Without a doubt, this evening is only a glimpse of the beginning of a long journey for Mallory Knox, which I anticipate will continue for a long time to come.