Rev your engines and crank it up!

Ignition is the debut EP from promising Walsall Alt-rock outfit Mallen and I’ve developed a real soft spot for these guys based not only on this EP but on a couple of cracking live performances as well. Their sound exhibits strong nineties alt rock influences, if guitarist Dann Pritchard and vocalist Kelly Jane Mallen don’t own a whole host of CDs by Pearl Jam, Faith No More, Stone Temple Pilots and Soundgarden, I’ll be absolutely flabbergasted! Judging by those influences you’ll know there is a strong dark element and tone to their songs but they combine it with a thunderous metallic backbeat which makes their songs powerful and hard hitting.

Kelly Jane’s vocals are a very important element in making Mallen stand out amongst similar sounding bands; she has the whole moody low key grunge thing down to a fine art but she has a secret weapon up her sleeve many of her contemporaries don’t have and that is the ability to take it up a notch and deliver sweeping lighter vocal melodies. She has power and grit to her voice which she lets rip at times which combines excellently with the pounding nature of Mallen’s sound but I love it when she slips into a smoother style and for me, it’s a trademark that will help them gravitate to bigger stages and audiences. I also detect a little bit of Dolores O’Riordon of The Cranberries to Kelly Jane’s vocal style and I love that little spark that frequently pops up in her vocal melodies; think ‘Zombie’ and ‘Promises’ and you’ll know what I’m getting at.

Pritchard’s guitar playing is also another thing that instantly elevates them out of the promising local band category straight into serious contenders for world domination. Yes he delivers big powerful driven riffs but it’s his technical guitar work that really excites me and many bands like this would concentrate on impact power rather than the joy and hook of a nice little technical riff and that’s exactly where Pritchard launches the band out of mediocrity and into the spot light.

My favourite track is probably ‘Rise To Fly’ as I feel this one song alone highlights everything that I find so compelling about Mallen and it features a wonderful sweeping chorus which shows there is more to the band than the blood and thunder that is delivered in bombastic effect on tracks like ‘Ride’ which I’m confident will become a live staple for them.

Mallen have the songs, the talent, the image and the stage presence to take things to the next level very easily here’s hoping they get those breaks to prove me right. Ignition comes highly recommended for all alt rock fans and anyone who just plain old loves female vocalists. Roaring powerful riff driven rock with soaring and powerful vocals, rev your engines and crank it up! 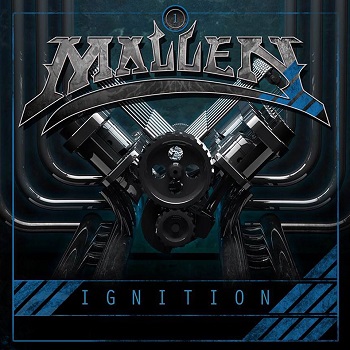