Make’s third album is out on July 15 2016, via Accident Prone Records. Paul Castles joins the Pilgrimage…

While Make isn’t the most inspiring name I’ve ever come across, this is more than compensated for by the quality of the music created by the North Carolina trio. Pilgrimage of Loathing is their third album, their darkest to date, and the six stark tracks of sludge encased doom connect on a multitude of levels. This though is not the oppressive doom as played by the likes of Bell Witch.

Of course darkness and a scent of decay in the air prevail as without it would scarcely constitute doom at all. But the blackened content that inspires Make is certainly not some ethereal wispiness. Instead their venom is fed through what they see and hear in their day to day lives around Chapel Hill – whether it’s political, the police, the media – there’s certainly no shortage of subjects from which Make are happy to pick an argument.

A rumbustious symphonic edged intro leads us into the confident opener ‘The Somnambulist’ which stretches to almost 10 minutes. When the vocals arrive they are venomously spat out over a mid-tempo throb of a beat before gradually taking on a more eerie tone amidst a cascade of ascending riffwork and a few monastic chants around the edges for good measure. Around the midway point the devilment ebbs away and some light is allowed into Make’s world with clean crisp singing over a gentle free flowing rhythm with persuasive guitars helping push back the gloom before the corner turns once more as Make unleash more dark grooves with a hook in them big enough to pull out your wisdom teeth with one tug.

The impressively titled ‘Birthed Into A Grave They Made for You’ has a metronomic beat that drives the song along over a haze of distorted guitars and a barking dynamic vocal  that collectively create a commanding crescendo, but again one more fevered than a standard doom approach. This one bites you hard and once its teeth sink into you they’re hard to shift.

With the following song called ‘Two Hawks Fucking’ another bout of aural combat is anticipated. In fact what we get is a five-minute instrumental which helps cool heated brows after the first two sonic slabs. Far from being an excuse to pop the kettle on this ambient release is in fact a creative composition that adds another layer to the album.

Make return to type on the snappy ‘Garbage’, the shortest of the six tracks and the most vibrant, with just a flowing riff pattern punching its way deep into your solar plexus as you once more succumb to Make’s majestic power, added extra dimension with a hairy Sabbath riff  towards the tail end helping steer this to a satisfying conclusion.

For those of us who relish a slab of monolithic funereal doom, then a cover of The Stooges’ ‘Dirt’ meets the request. A simple plodding beat strips away the frills, leaving Make exposed with only a biting snarling vocal before two distinct voices combine with a haunting ‘Do you feel it when you touch me?’ harmony that grows ever wilder and more challenging the deeper into the song you go.

Final track ‘Nothing’ is a warmer offering with clean vocals riding the waves of persuasive rhythms as the song develops, increases in tempo and before you’re aware has completely wrapped itself around you and is pulling you into its very core. Once you’re entrapped it then erupts into a cacophonous explosion of flailing guitars and distressed vocals driven forward by a commanding beat.

There’s a lot going on within these six tracks, not all of it connecting with just one or two listens. Investing some time to really explore Pilgrimage of Loathing will not be a wasted experience. 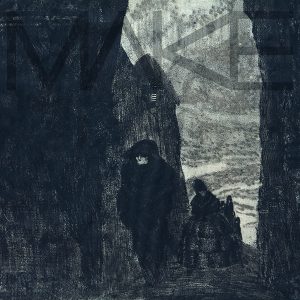