The Midlands Rocks has traditionally elected not to cover tribute bands, even the most well-known arena fillers like the Australian Pink Floyd. However, it’s generally agreed that an exception can be made for Maiden United. Firstly because of the personnel involved, as the line-up has included various members of Within Temptation as well as Damian Wilson, who has fronted bands like Threshold and Landmarq as well has having made regular appearances on albums by Arjen Lucassen (Ayreon), and in addition filling in on drums tonight is Lee Morris, of Paradise Lost. Secondly, they’ve recorded three albums in this guise, and I think it’s fair to say they’ve done something with the Maiden songs that’s almost unique, as was very evident at this show.

The Slade Rooms gig was the last one in a brief UK tour, supported by the extremely promising young band Hekz. The venue was in seated mode for this gig, and when the band took the stage promptly at 8 o’clock, a fair number of the seats were already occupied, which was good to see, and I think I can say that Hekz rose to the occasion. A five-piece, with two guitars, acoustic bass, keys and drums, their playing was spot-on and their vocals were of a very high standard, particularly on songs like ‘From Obscurity To Eternity’, where Matt Young’s lead vocals really shone in this setting, It was clear the audience liked what they were hearing, with the band getting some impressive crowd participation during ‘For Our Lives’, and when the band played an edited version of ‘Journey’s End’, a mere six minutes long compared to the 17 minutes-worth on the album, and a song that, suitably, has a definite Maiden influence, there was even a mini standing ovation. They closed with a cover, the Moody Blues ‘Nights In White Satin’, again excellently delivered, and, judging by the queue at the merchandise stand when the band finished their set, they’d won a lot of new admirers on the night. This band should go far. 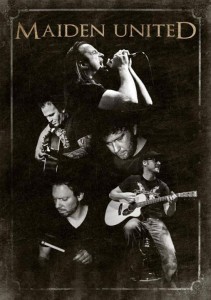 The sound for Hekz’s set had been well-nigh perfect, so it was a bit of a puzzle as to why the volume knob had been set at a much higher level when Maiden United burst into song with the set opener, ‘Strange World’, but mercifully, it had not affected the overall quality. One of the most interesting things about the band’s performances is that they don’t just do a straight run through of the originals, only exchanging electric guitars for acoustic. A lot of care and thought has gone into rearranging the songs, which, although these may often be very familiar songs, can often lead to a genuine feeling of surprise when you finally recognise what song the band are playing, a perfect example being the second song in tonight’s set, ‘Charlotte The Harlot’, even when Damian Wilson announced it beforehand. They’re also not afraid to give well known songs like ‘2 Minutes To Midnight’, a serious overhaul, giving it a Steely Dan feel, often making it seem as if we’re hearing these songs for the first time.

It’s also intriguing that they choose their material from some of the less highlighted parts of the Maiden catalogue. Although they do ‘The Trooper’ and ‘ 2 Minutes To Midnight’, there are few other songs as well known, there’s no ‘Number of The Beast, for example, and the early part of the set concentrates on the Paul Di’Anno years, including a fantastic, bluesy version of ‘Prowler’, which takes out all the bravado of the original and brings out the desperation and hopelessness of the lyrics, and an equally startling reading of ‘The Trooper’, which, with Lee Morris’ military drum beat and Ruud Jolie’s guitar, had an almost Spaghetti Western feel. They even do a song from the Blaze Bayley era of the band, ‘Futureal’.

It should also be said that the performances various band members have much to do with how well this concept works. After the initial strangeness of seeing a member of a multi-million selling, arena-playing band like Within Temptation gracing the stage of the Slade Rooms, Ruud Jolie’s guitar is never less than excellent, Lee Morris and Joey Bruers combine well in the rhythm section, and Huub van Loon does a fine job on piano and organ. Dominating proceedings most of the time, though, is the force of nature that is Damian Wilson. At the start of the show he emerges from the dressing room only to make a circuit of the room and mounting the stage from the front row, and regularly, during instrumental breaks, leaves the stage for another trip round the room, including nipping out for a Guinness, claiming he’d had to venture up Broad Street to the Hogshead because the Slade Rooms bar had closed. He also used a couple of the chairs to improvise a walkway, giving the photographers in the audience an unusual opportunity. His between song chatter was just as entertaining, with stories of the many auditions he’s attended, included one for Slade, when he claimed he thought he was trying out for Slayer, and even Maiden themselves, when he lost out to Blaze Bayley. Despite all this, it must never be forgotten that he is an absolutely superb singer in his own right. His singing on ‘Die With Your Boots On’ for example, was outstanding, and in my humble opinion, he’s one of British Rock’s finest and yet most underrated vocalists.

There are some good Maiden tribute bands out there, giving faithful reproductions of crowd pleasing songs, but Maiden United are something different, offering a genuinely new perspective on the work of one of our greatest metal bands, and providing a fine evening’s entertainment to boot. They’ll be back, and if you give them a chance I don’t think you’ll go away disappointed.