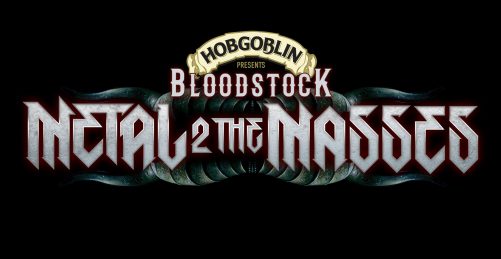 For young bands at the start of their career the hallowed grounds of Bloodstock is viewed as little short of the road to Babylon. You’re desperate to get there, play there, and soak up all that the raucous three-day metal fest in deepest Derbyshire has to offer.

For most emerging acts the Metal 2 The Masses competition is Bloodstock’s golden ticket. But while a trip to Willy Wonka’s factory is a game of chance, Metal 2 The Masses seeks to acknowledge and reward the most talented, creative, and those with most potential.

Much like the World Cup, there are early rounds, knockout stages right through to semi-finals and final. So it came as no surprise to find a large crowd shoehorned into the sauna-like Hammer And The Anvil for the climax of the Birmingham leg of this compelling nationwide challenge. 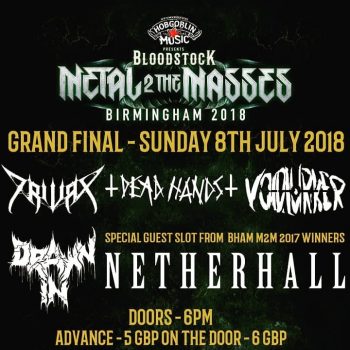 The four finalists were randomly drawn and Dead Hands were out first. A young quartet, vocalist Richard Phillips opted to spend most of the time on the floor rather than the stage and went about his work with unbridled aggression, ably backed by his three partners in cranial crime who delivered a ferocious hardcore onslaught of impressively sustained skull crushing velocity.

Voidlurker only played their first ever gig in the opening round of the Birmingham Metal 2 The Masses competition. Having successfully navigated their way through all stages to reach the final, their presence in the last four speaks volumes about this trio’s potential. While creating their share of cavernous doomy riffs, overall their sound was a bit spikier, reflected in part by the EyeHateGod T-shirt worn by the frontman. They’re back at THATA later this month supporting Archelon and local rednecks Burden of the Noose – Full details here.

There are laws in place to prevent dogs from being left in cars on hot days. Sadly the same doesn’t apply to sweltering metalheads at The Hammer And The Anvil who were having to keep fluid levels up in order to greet the evening’s third band, Drawn In. This bunch had breakdowns heavy enough to sink a North Sea trawler and once the rhythm section latched onto a steak-sized chug they proceeded to bleed it dry. Impressive.

Completing the line-up were Trivax, the most experienced act of the night, and had William Hill been running a book they would almost certainly have headed the betting. The incendiary black metal warriors have been a familiar fixture of the city’s underground scene in the last couple of years. They have lined up a ‘Hysteria Across the UK’ tour which opens with a ‘home show’ at Scruffy Murphys in Birmingham on 28 September – Full details here.

If you’re travelling to Bloodstock next month you’ll see them much sooner however, as when Bloodstock guru and M2TM organiser Simon Hall announced the winner at the end of the night it was Trivax who triumphed in the race to the holy grail of metal. Few would contest the decision as Trivax, blackened and battle-hardened, are a frightening proposition in full flow, with the almost detectable pulse of Satan inserting a further deathly layer into the mix.

Good luck to all four acts, each of whom appears to have a bright future within the darkened corridors of the Midlands’ underground scene.