The last few years have seen Lynyrd Skynyrd release live DVDs at an alarming rate with one appearing almost every tour and this being the second to hit the shelves this year. Ultimately it’s a suitable medium for a quintessential live band, and goes some way to recreate the concert atmosphere. What makes this release a little more special is that it was recorded over two nights on home turf at the Florida Theatre, Jacksonville with each night focussing on a different album.

The first night sees the band run through the legendary debut album, Pronounced…, in its original running order. Skynyrd come from an era where bands were given time to develop their craft over a number of albums, but Skynyrd arrived firing on all cylinders with one of the greatest debut albums recorded. So much so that 5 of these 8 songs still remain in their standard set to this day, and as much as the likes of ‘Freebird’, ‘Tuesday’s Gone’ and ‘Simple Man’ are timeless classics, the very nature of the other tracks makes them stand out. ‘Mississippi Kid’, in particular, delights with some sublime slide guitar from Gary Rossington as a counterpoint to Medlocke’s mandolin.

The second night set follows with Second Helping being the focus. Again, this set will feature many well known songs to the casual fan, but the gems are the rarely played live numbers; ‘I Need You’, ‘Don’t Ask Me No Questions’ and ‘Swamp Music’. The lighting on the second night is far superior to the first night (which suffered occasionally from too much pink and blue bleaching from the LED lights) and makes this part of the DVD far more watchable. In fact, both shows are well filmed and edited in a style that suits the band, with shots that focus on the correct guitars for the solos and avoid the trend of fast cut nano second editing. The sound throughout is superb, and the interview extras provide some interesting snippets that help make this a great package for both hard core fans and those who like the odd Skynyrd song and want to delve a little deeper. 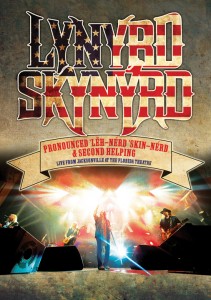