The Lords Of The Riff tour concept is a fine one… 1) Package together 3 up-and-coming hard rock bands, each on the cusp of a breakthrough to a wider fan base. 2) Rotate the running order so each has a shout at closing the show (e.g. headlining). 3) Have an entry price of just a tenner. 4) Run it under the promo banner of Classic Rock Magazine and Metal Hammer Magazine to extend your reach. 5) Find a sponsor to help underwrite the costs – Kraken Rum.

The 1st Volume featured Scorpion Child and Monster Truck and packed out the Academy 3 in Birmingham. Volume 2 was booked in to the larger Academy 2. A 600 capacity room, so the promoters must have been confident. However, if there were more than 40 in the room this night I would have been very surprised. At one point I counted 32, including myself.

Yes, my review should be about the music and we’ll get to that but for such a well promoted show I was so disappointed for the 3 international acts who came to such a big UK city to only play in front of a handful of fans. Still, nothing could be done on the night and the bands all took it on the chin and performed like the room was packed to the rafters.

Planet of Zeus were a new addition to the line-up, a late substitution for the recently (and lamentably) disbanded Anti-Mortem. These loveable Greeks came to rock and brought a Mediterranean flavour to their brand of southern hard rock. The vocals were a bit ‘shouty’ for my liking but when sung clean, I could see the real appeal of these God-like riffmeisters. Well worth checking out.

Kyng were a revelation. They are a tight-as-f**k stoner-biased hard rock trio led by singer-guitarist Eddie Veliz. Eddie is an engaging frontman, able to adapt to the intimacy of the small crowd in a large room, he was having one-to-one between song conversations with many in the audience – even good humouredly chastising one poor guy down the front for biting his nails. 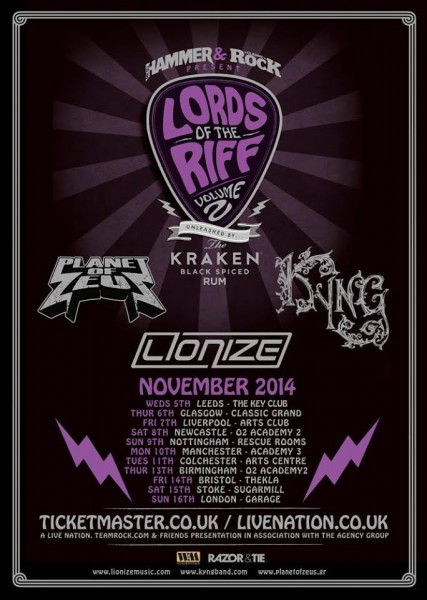 Drawing predominately from their current album, Burn The Serum, these guys deserve to be huge. The driving hooks and melodies were worth the journey alone, sounding much bigger than any three-piece has a right to. They even had the cheek to introduce the fact that since they were in Birmingham that would do a Sabbath cover “Like you haven’t heard that before, right?” before breaking out into a cranked up ‘Hot For Teacher’ by Van Halen.

Having caught the attention of several MR colleagues when they supported Clutch back in May, I was keen to check out Lionize for myself but not really knowing what to expect.

What the now select crowd got was 40 minutes of super-funked up groove soul/stoner rock of the highest order. Big on Hammond-sounding keys, this was seriously dance-tastic big band rock ‘n’ roll. Take the DNA of James Brown spliced with Deep Purple and you may be touching on the fringes of their sound.  I could now see what all the fuss was about and just why the guys in Clutch were taking them under their not inconsiderable wings.

Get your dancing shoes on and go check out their 5 album back catalogue.