Lordi bring the Eurovision-tainted costumed hard rock to the masses on 25 May, and Allan is digging out his fake horns to join in the fun

Lordi have returned with what is now their ninth studio album. For a rock band that once upon a time won Eurovision, that seems like a very long time to stick around. Self-described as ‘their most controversial album to date’ I had to admit I was very much looking forward to seeing what they’d come up with this time around.

I’ve said it before, and I’ll say it again: Lordi is not just a joke band wearing costumes. Mr Lordi has been around a long while in musical terms, and the songwriting craft on display on his albums is, quite frankly, superb. This time around, though, there’s something that’s a little sticking point – and that’s where the self-proclaimed controversy comes in.

Usually, Lordi’s albums kinda do the whole schlock-b-movie-horror thing, and it’s a lot of fun. Now, however, they’ve decided to go and wind people up by leaning heavily into the whole sexual references and thinly-veiled innuendo. Double-entendre would be one entendre too many to describe this. For some, especially in the light of the #MeToo movement, it’s going to be a bit too near the knuckle in places – it doesn’t really pull any punches and with tracks like ‘Naked In My Cellar’ basically telling a story of keeping a sex-slave in the basement it’s probably going to get right on the wrong side of a lot of people.

And that’s a real shame because, as always, Lordi’s produced a belting album full of fun tunes and awesome music. Yeah okay, it’s crude, bordering on offensive (or, depending on your personal tastes, way past the border and running gleefully into the hills beyond) but the riffs… Oh, they’re glorious. They’re big, crunchy, stompy and they’re awesome. The songs run through the album in a gleeful, maniacal, tasteless and thoroughly inappropriate way and I bloody love it. Production is top-notch, and while the lyrics are over-the-top they’re weirdly catchy and the music is full of hooks that drill into your skull.

If you’re familiar with their previous works, you’ll notice some subtle changes – the increased vocal range from Mr Lordi, for example, or a softer approach in one or two tracks. It’s not wildly different, but it still shows some level of growth which is always welcome. Ultimately, it’s a typically fun, over the top, and totally theatrical Lordi album. And the best part? They’re even better on tour… 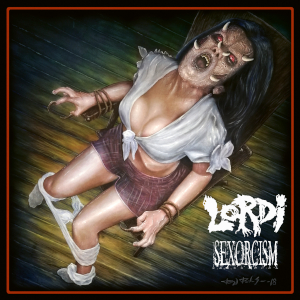