After 20 years of being ever the Consigliere – be it to Bruce Springsteen or Tony Soprano – Steve (Little Steven) Van Zandt has decided to re-take centre stage and give his long dormant solo career a shot in the arm with ‘Soulfire’, this rousing collection of songs old, new and borrowed.

After having put together a band and setlist to play Bluesfest in London last October, Van Zandt decided to keep the momentum rolling by heading into a studio and hastily recording these 12 tracks, described (in a pretty much nail-on-the-head stylee) by the great man himself as, “soul horns meet rock ‘n roll guitar”.

Anyone who has heard lead single (and title track) ‘Soulfire’ will know what to expect. There’s a funky intro with a slight Latin flavour. Very rock ‘n roll. Very ‘Miami’ Steve. Female backing vocals and a smoking horn section, a brief, stinging guitar solo and more than a touch of Motown. All of Van Zandts garage rock touchstones are in there. You can easily imagine Brucie singing this (Springsteen, NOT Forsyth). It’s a three minute, upbeat 45, delivered with flair and joy by the 15-piece band.

So let’s break this down. Of the new songs, ‘Saint Valentine’s Day’ shines the brightest. Initially written for Nancy Sinatra – you can imagine how it would have been arranged, but praise the Lord for Stevie’s cranked up Strat. It’s scorching, straight ahead rock with loud, melodic slide guitar and a brilliant breakdown where Steve’s acting chops come into play, he inhabits the vocals like a youthful Brando! Elsewhere we have feelgood soft rock and flawlessly executed doo-wop which is no mere pastiche – it’s the real deal…goosebump raisingly so!

The re-recorded songs written for others (well, mostly Southside Johnny) are equally good, if not better. There’s lots of blue-eyed rock ‘n soul, lots of horns and probably more “baby’s” that you’ll find in Robert Plants entire recorded oeuvre! “I’m coming back, back for what’s mine”, he sings at one point…sounds like a bit of a mission statement to me.

Van Zandt the songwriter and interpreter shines on these songs too. ‘Some Things Just Don’t Change’ is a pitch-perfect attempt at a Temptations style Motown song, right down to the big Otis Redding finish (yeah, yeah, I know, he’s Stax) and a perfect James Jamerson bass moment (don’t know who he is? Find out. You’ll thank me). Oh yeah, and that Netflix film Scorses is making with DeNiro/Pacino? ‘Love On The Wrong Side Of Town’ needs to be in it!

Southside Johnnys’ classic, ‘I Don’t Want To Go Home’, is given a subtle but brilliant makeover. It has a slightly older, more mournful feel. it’s slowed down a fraction and becomes an older mans take on a song of youth. It has an air of reflection rather than abandon and this shrewd move works perfectly.

But the big surprises here are the out and out covers. ‘Blues Is My Business’ is an Etta James song. Now, lots of blues artists have gone down this big band route of late but none of them come close to this. Stevie is looser, more confident, natural. His experience and obvious love of this stuff shines through, he whoops it up as the Hammond organ briefly takes centre stage.

What a return! No other release this year has left me with such a grin on my face. It’s a riotous potted history of rock ‘n roll, soul ‘n funk, immaculately produced and performed by a dude who could and should have been a resident of the legendary Brill Building. Brilliant. 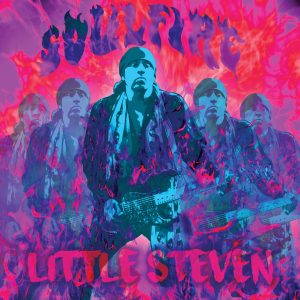