Back in the 90’s, if you had Jimmy Iovine and John Kalodner behind you, you were set, you were made. Add to that being signed to Geffen and produced by Bob Rock and the sky was the limit. How much more 90’s could you be? None. None more 90’s. Well, actually you could…if your vocalist (the brilliant Ron Young) had a bit part in Terminator 2, as a biker being thrown through a window by Arnold Schwarzenegger. And, let’s not forget the actual music – their self-titled 1990 album was a blinder, capped by the swamp gospel of ‘Cajun Panther’ and a fine cover of Aretha Franklins ‘Chain Of Fools’ (see above) – these biker dudes had soul!

But then a perfect storm struck. Their label was sold, their records lost in transit to their new distributor in a cluster fuck worthy of Spinal Tap, and then…grunge. The zeitgeist shifted a few degrees and Little Caesar were one of the many notable casualties. They finally re-emerged in 2001 for some high profile gigs and then only sporadically since but here they are in 2018, back – bloody but unbowed and clutching ‘Eight’ – their, um, eighth release. If perseverance sold albums they’d be filling stadiums.

So, what do Little Caesar circa 2018 sound like? Pretty much exactly like their 90’s selves and that’s no bad thing. Opening track ’21 Again’ bares its teeth nicely. It’s 90’s hard driving biker rock. The riff is a smoothly mean thing and Young is in fine, dirty voice – the grit and soul are both still there. The album divides its attentions between chugging, chrome plated rockers and epic, lighters aloft ballads.

The ballads are classic soft-focus MTV big hitters, full of heart on sleeve emotions and big solos. The two bonus tracks are also noteworthy – ‘Slow Ride’ in particular (no, it’s not a Foghat cover) is a sleazy, brooding thing full of car based innuendo. Both of these tracks are easily the equal of everything else on offer here. Quality control is clearly high.

Quality. That’s what’s on offer here, in spades. Oh, and experience. And class. Energised and on form, Little Caesar are doing exactly what they did back in the day but doing it exceedingly well. A fine display of energy, passion, commitment and joy, it’s their best since their 1990 classic, and boy does it rock! It’s a pleasure to have them back. 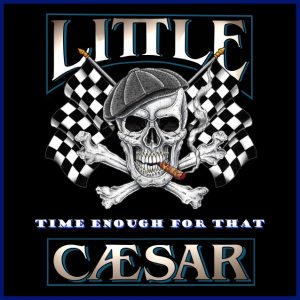