Paul Castles thought Hibernation was a Scottish football team until he settled down with Lightsabres’ new album. Released on vinyl in March by Hevisike Records, it’s released on July 1 (first 50 copies with temporary tattoo!)  in cassette form through Medusa Crush Recordings

John Strömshed will be a familiar name to you if you’ve ever come across Swedish hard rock/blues outfit Tunga Moln… which to make it clear, I haven’t. Lightsabres is Strömshed’s solo project and familiarising myself with its new album Hibernation has been time well spent, albeit one clad in a colourful whirl of psychedelia. Strömshed is a native of the Swedish city Luleå and this is Lightsabre’s fourth album. Listening to it is a distinct experience and one coated in a delicious fuzzball of stoner shapes that you would have no problem distinguishing in an audio identity parade.

While the term hibernation usually suggests squirreling away with covers pulled up over the head for months on end, musically this album is so much more than that. Rather than being cold and dormant, Hibernation has more life in it than a bio yoghurt although is a far tastier experience. Of conventional metal acts, Lightsabres do in places recall the Deftones although the spine-tingling opener, ‘Hibernation’, also at times echoes the Foo Fighters – or maybe that’s just me? Either way this deft opener means Hibernation could scarcely get off to a more promising start. Moving on to ‘Endless Summer’, Lightsabres up the fuzz rations with Strömshed’s distinctive singing style meaning that he sounds as though he’s in the next room, or even at the foot of the garden.

The pace with Lightsabres is ambling, a tad faster than a jog but certainly not a full foot to the floor sprint. The songs pulse with poignancy and panache, ‘Cascades of Blood’ staking an early claim for the pick of the dozen tracks. Its mournful tones go straight to the heart strings, Strömshed’s feathered touch resting on top of a groove so soft it wouldn’t wake a kitten. By the time ‘Whisper To Me Softly’ finds its slightly edgier stride it starts to dawn on you that this really is an exceptional album with more flavours than an ice cream seller on Bournemouth beach. The chorus is a wonderfully uplifting passage with Strömshed opening himself up with an aching cry over a magically moving melody. The interesting thing is the way Lightsabres manage to capture these rich moments so succinctly with most tracks around the three-minute mark. It’s as though each song offers just a small portal through which to look and listen to the magic and guile within. And as one window shuts, so another opens.

On ‘Throw It Away’ the grooves from the bass are the chunkiest yet but when cushioned against a gentle rhythm and exquisite harmonies the combination is rich in quality. Although ‘Satan’s Pilgrim’ may sound dark the following ‘Blue Smoke’ is actually one of the more pedestrian numbers here but the barely suppressed atmospheric clouds created are sublime in their delivery. Just climb on board and prepare to float away. The rumbling and restless ‘Blood On The Snow’ is full of hypnotic stoner arcs before the quivering ‘Walking On Thin Ice’ closes the door on a stunning album, full of beautiful melodies, mesmeric patterns and all coated with a healthy layer of 70s kaleidoscopic innocence. 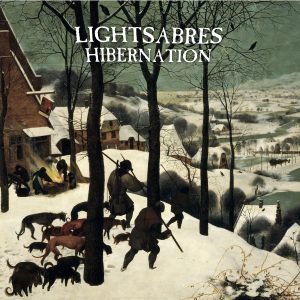