Dressed in a sparkling black suit that fractures light in all directions, the Neasden Queen Of Soul Mari Wilson looks every inch the star, and with her oak-aged vocals, she sounds like one, too. Mari came to prominence in the early ‘80s via a sublime string of singles, but as is often the case, her creativity peaked after her chart-placings declined, and if you need proof then check ‘Don’t Sleep In The Subway’ from 2016’s covers album, Pop Deluxe. Ably backed by a band who barely put a note wrong, Mari Wilson isn’t the type of artist to turn her back on the past and 1982 smash hit ‘Always Something There To Remind Me’ returns us to the beehive days and brings down the curtain in spectacular style.

The last time I saw Level 42 it was in this very venue, and on that evening the seats were taken out to create a huge dance floor. However, on entering the auditorium tonight I notice the rows of seating have been left in place, so I’m eager to see how this configuration will impact the show. Such questions prove to be academic, because as soon as Mark King appears with his signature bass and slaps out the intro to (quite aptly) ‘To Be With You Again’ the whole crowd rise in unison to indulge in some fine “dad dancing”, and why not? There’s something very uplifting and life-affirming about Level 42’s sound, so much so that it should be prescribed on the NHS, even when their songs take on a reflective, whimsical tone (such as the following ‘Running In The Family’ and ‘Children Say’) they demand you move your body and shake your tush. The fact that the band appear as a septet (with a three-piece brass section) only adds to their buoyancy and a bass heavy ‘Love Games’ radiates its good vibrations throughout the venue. 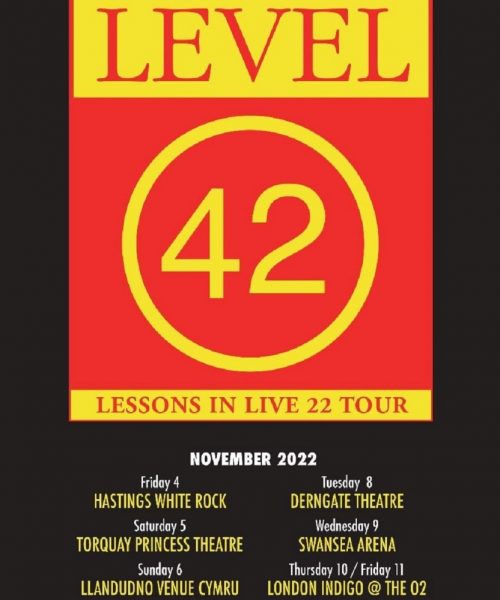 Before Level 42 became global sensations and danced their way to the top of the charts, their heavy funk/jazz fusion was quite revolutionary, and there’s some interesting deep cuts to be found on their early albums. It would have been nice if they’d excavated ‘Heathrow’ and ‘Eyes Waterfalling’ for the hardcore fan, but looking at the happy faces surrounding me, it seems I’m the only one concerned with such questions and you have to admire the band for giving the crowd exactly what they want. Tonight’s performance is a crowd-pleasing greatest hits selection, and the set list could quite easily have been culled from the Level Best compilation with ‘Starchild’, ‘Something About You’ and set closer ‘Heaven In My Hands’ all raising the temperature a few degrees.

Of course, the band return for three encores, including finale ‘Hot Water’ and with no dip in their energy levels the band are a riotous cornucopia of sight and sound, and they send not a soul home disappointed.