After headlining this year’s Dames of Darkness Festival, Leave’s Eyes returned to the UK for a good length tour in support of their rather fine new album King of Kings, arriving at Slade Rooms midway through the tour.

Although it was advertised that doors were to open at seven o’clock, it was clear the sound check was still in progress when the start time of 7.30 arrived. In the end the doors opened not long after that, but local metallers Winter Storm took the stage almost immediately afterwards, so were playing to a hall that was steadily filling for most of the time they were on. To be fair, though, they had a better hearing and more appreciation than a lot of third on the bill bands receive on these occasions, even allowing for them being a local band.

Although they’re on a bill with two almost archetypal symphonic metal bands, Winter Storm are a more straightforward melodic metal band than the others. Hannah Fieldhouse’s vocals fit the usual template to a certain extent, but they don’t use the lush orchestrations and samples that other bands do, although the sound was nicely filled out and enhanced by keyboard player Doomsday, who for some reason wore a Mexican wrestling mask throughout the set and indeed afterwards as well. I have no idea why. Songs like ‘The Embrace’ and ‘Frozen Stream’, with its extended instrumental section, are well worth hearing, as was the excellently conceived intro to the final song in the set, ‘Firedancer’, but occasionally there was a bit of sameyness in the songs. It might be unfair to judge the band on this showing as they were playing with a fill-in drummer who’d only had one rehearsal with the band, but there was plenty about Winter Storm to make them worth investigating further.

This tour with Leave’s Eyes was a debut appearance in the UK for Spain’s Diabulus In Musica (the band’s logo is spelled out with ‘v’s instead of ‘u’s, in keeping with the Latin title, but in the interests of easier pronunciation, I’ll go with the phonetics), but on this showing, I wouldn’t be at all surprised if they paid us a return visit quite soon, especially if the talent scouts for the Dames of Darkness Festival were in attendance. As noted previously, they’re a far more straightforward female-fronted, symphonic metal band, complete with operatic vocals from Zuberoa Aznarez, along with some growls and grunts from keyboard player Gorka Elso. Like several bands in this field, they play live without a bassist, which some people I know will disapprove of heartily, and which I think can often hamper any sense of freshness and spontaneity on stage. This was true with the band to a certain extent, but nevertheless, this is a very good and capable band. Zuberoa has a very winning stage presence, changing from operatic to conventional vocals with ease, and the band has some good songs. Again, another band well worth your attention. 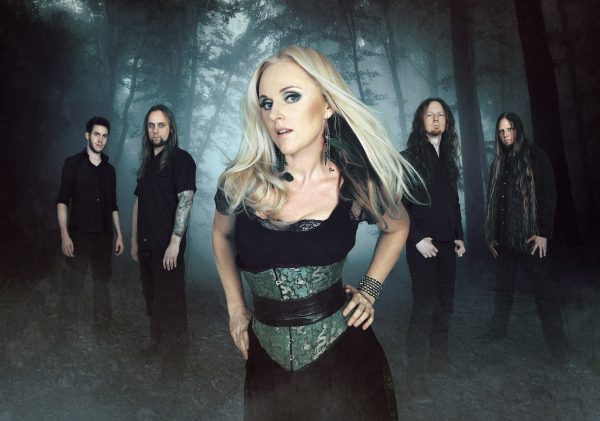 So to our headliners Leave’s Eyes, it was nice that, as they’d announced the title of their new album at the Dames of Darkness festival, that they brought the King Of Kings tour back to just up the road at the Slade Rooms. As the intro tape of ‘Sweren’ rolled, and the band entered the stage, it was interesting to see that they had a bassist, unlike the show earlier in the year, although they do still rely heavily on backing tracks for the strings and orchestral parts of their music. The opening salvo of ‘Halvdan The Black’ and ‘Sacred Vow’, both from the new album, was also enough to establish that the sound was terrific, for a band with music this heavy and intense, as good as any I’ve heard in the Slade Rooms. Vocalist Alex Krull, with a full range of growls, grunts and all round rabble rousing, was a ball of energy, bounding on and off stage as required, while his vocal partner Liv Kristine was a more serene figure, when she wasn’t exploiting her formidable vocal range, full of smiles and obvious pleasure at the crowd’s response.

Clearly the set was going to be focussed on the new album, making up nearly half of the songs played on the night, interspersed with carefully chosen songs from their other albums. The older songs seem to concentrate more on the symphonic, rather than the metal, as easily seen when ‘Farewell Proud Men’ followed ‘Sacred Vow’, and the contrast was quite marked, although when ‘Galswintha’ followed ‘Lovelorn’ later in the set, the latter was the only song in the set that didn’t really capture the audience, being a little too frantic and difficult to catch the vocals, but then matters were put right with storming versions of ‘My Destiny’ and a new song, ‘Swords in Rock’. During the latter, Alex Krull thought it might be time to increase the level of audience participation, using the time honoured tactic of dividing the audience in two, and playing one off against the other by comparing them to Winston Churchill ‘laid back and smoking a cigar, continuing through to the next song, ‘Hell To The Heavens’ and the main set closer, the title track of the new album.

I thought the main set was on the short side, at 65 minutes, but the encores made up for that a little. Firstly a cracking ‘My Elegy’, with Liv hitting even newer heights than before, then after another off stage/on stage interval, ‘Blazing Waters’, from the new album, with Alex Krull respendent in Norse helmet and armour, and brandishing a highly realistic sword over the heads of the front row. I’ve been able to see Leave’s Eyes a few times in the last couple of years, and this was easily the best performance I’ve seen them give. Kings Of Kings is a quality album, the songs worked well on stage, and the band rose to the occasion and with a crowd that was on their side from the beginning, gave us a fine evening’s music.