As the final band of the late, great (and much lamented) Würzel metal maestros Leader Of Down are always going to have comparisons drawn with Motörhead. While that’s a good point of reference the band are rocking a unique groove and their sophomore album, The Screwtape Letters, finds them coming into their own and blossoming into a beauteous beast.

As introductions go opening salvo ‘Cat’s Eye Night’ is damn near perfect. A thunderous drum roll and an electrifying guitar solo combine in a musical tornado that sweeps from speaker to speaker and leaves a trail of destruction in its wake. Leader Of Down are an unstoppable force; there’s real power and drive to their sound and ‘Cat’s Eye Night’ is a battering ram that’ll hammer down any obstacle in its path. With a wonderfully throaty roar Matt Baker confidently commandeers the vocal spot and his oak-aged, bourbon croak adds an air of authority as all around him the band crash through the gears and unleash all sorts of mayhem and, rather like being a passenger in a rally car, it’s a white-knuckle ride which leaves no option but to hold on and enjoy the ride.

Those partial to the sounds of classic metal will find a spiritual home in Leader Of Down, and especially when we check into ‘Holloway Motel’. Riffy, heavy on the cowbell and with plenty of gnarly solos it’s a foot-on-the-monitor, horns-held-high celebration that encapsulates all that’s good about ballsy rock n’ roll. Drummer Daniel Akaoui and bassist Tim Atkinson lock in tightly to create a hefty rhythm section and ensures that ‘Holloway Motel’ marches with military muster. Like seeing your reflection in a bullet ‘Hitman’ arrives with little fanfare (and is all the better for it) and features a guest spot from former Maiden guitarist Dennis Stratton who delivers the kind of solo that illuminated their debut, Iron Maiden. ‘Hitman’ was the album’s lead single and makes the perfect calling card; it’s hard, heavy, laden with groove and, as with most of this album, instantly memorable.

There’s little space between the tracks meaning that The Screwtape Letters delivers a succession of quick blows that are all the more powerful for their rapidity. There’s no soppy ballad or such nonsense to spoil the party, just rock banger after rock banger as ‘Here’s Johnny’ knocks on your cranium like Jack Nicholson with an axe while ‘Whiskey Preacher’ swings with a tight-but-loose, almost jazzy, sensibility and with plenty of slide guitar it’s the stuff that rock n’ roll dreams are made of. Leader Of Down produce the kind of music that attacks both your head and heart and if their infectious grooves don’t have you reaching for your air guitar, I suggest a new pair of ears. Bringing the album to a frantic conclusion is ‘Midnight In London’, a cornucopia of riotous sound that swirls like a tempest, which is exactly as Leader Of Down arrived.

The Screwtape Letters finds Leader Of Down paying homage to the past (and paying a fitting tribute to Würzel) while eyeing up a bright future. Featuring ten tracks in a furious 33 minutes this album doesn’t pull any punches and it’s certainly not for the faint hearted. Although the year is barely three months old The Screwtape Letters is sure to be one of 2022’s key releases. 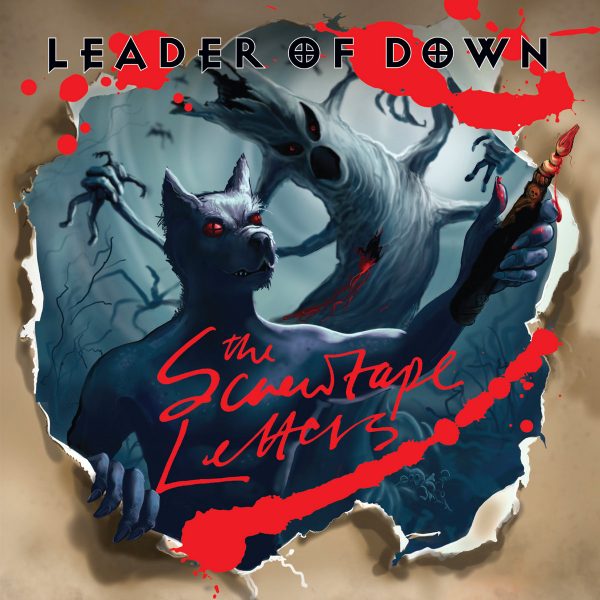