It was a genuine pleasure to welcome Lazuli back to the Robin after their superb show here with Moon Safari almost exactly two years ago. This would also be their first show back in the Midlands since supporting Fish at Birmingham Town Hall last year, although they had been scheduled to play the Zephyr Lounge in Leamington last year, but that show was cancelled.

Tonight’s support came from Howard Sinclair, a familiar figure who’s played here in several guises, as a solo artist, with his band and as keyboard player in Also Eden. Tonight he played some of his own songs, accompanying himself on guitar, as well as some covers, including what seemed to be an impromptu version of Gershwin’s ‘Summertime’, and ending with his own version of Peter Gabriel’s ‘Solsbury Hill’. That might be described as a brave choice, in that it’s such a familiar and well-loved song that any comparisons are likely to be unfavourable, no matter how good the cover is, even if there’s rarely any harm in playing something people know. He has a good strong voice, but I think it’s fair to say that he has yet find the right vehicle for his talent. 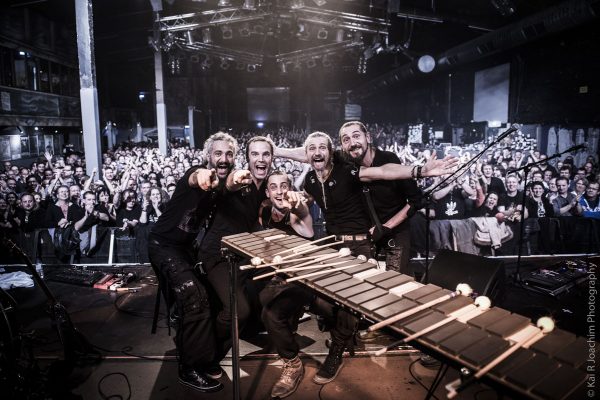 When gig going is your passion, and you’ve been following it for (cough!) a while, it’s rare that you see something that’s genuinely fresh, or even genuinely startling, in genres where you might think the rules and conventions are fairly established, even cut and dried. If you speak to anyone who’s seen Lazuli, it seems a common experience that the band are currently an almost uniquely exciting and exhilarating live experience, and tonight’s show did nothing to contradict that.

One thing that contributes to the band’s uniqueness is the slightly unusual instrumentation they use. While Dominique Leonetti and Gederic Byar, out front on guitars, and drummer Vincent Barnavol seem to be part of a conventional rock band, there is no bassist, the bottom line most often being taken care of by keyboardist Romain Thorel’s synthesiser, and Barnavol and Thorel can be seen swapping positions as one or the other will move to the marimba. Meanwhile, for those who are unaware, Claude Leonetti lost the use of his left arm in a motorcycle accident, and in order to continue to make music, he devised a totally unique instrument, the Leode. From a distance it looks like a stick bass, which he plays using the tapping technique, but up you can see that there are strings, the ‘fretboard’ being a touchpad, but using tapping and his pedal board, he creates a unique mix of conventional guitar sounds and effects, perhaps what Jimmy Page had in mind when he referred to ‘a guitar orchestra’. It’s not only amazing to hear, but fascinating to watch. Meanwhile Romain Thorel produces that most un-rock and roll instrument, a French horn, and using some electronic witchcraft, manages to make it sound variously like a saxophone, a clarinet, an Arabic Shoum and even a didgeridoo, often in the space of one song.

The band are touring in support of their most recent album, ‘Nos Ames Saoules’ (Our Drunk Souls), songs from which understandably featuring prominently in the set, and although it’s a very well crafted and listenable album, it really doesn’t properly represent the full drama and power of the band on stage. Opener ‘Les Temps Est La Rage’ (‘Rabid Times’) belies its title by being quite a gentle song to begin with, before the band begin to add the various layers and build up to a climax. ‘Le Liere’ (‘The Ivy’), also from the new album, has a touch of Marillion, although with a sense of joy and fascination with the world that draws you into the song, and then ‘Deraille’ (‘Derailed’) brings in some Zeppelin. The band shift from moments of gentleness and emotion to times when the band are firing on all cylinders and what might be described as Prog metal’ becomes almost industrial in its power. It’s brilliant stuff.

Overall the main set lasted for around 100 minutes, before a lengthy encore, beginning with a piano solo from Thorel, where he encourages the crowd to provide vocal backing while he plays a Keith Emerson-like jazz piano solo. Then the slowly building ‘Les Courants Ascendants’ (‘The Updrafts)’ before the band’s signature piece ‘Nine Hands Around The Marimba’, which is exactly as described, each of the band members grouped around the Marimba, at first playing an intricate piece of music, then improvising a little, including an excerpt from Bowie’s ‘Heroes’, all the while indulging in little bits of comic business, changing places, tapping each other on the head or stealing each others sticks. Again, something you probably won’t have seen anywhere else, but something once seen, will always be remembered.

The buzz and exhilaration in the crowd at the end of the gig was obvious and it was also very pleasing to see that the band drew a larger crowd than for their show with Moon Safari, and I really hope the word gets round and their reputation continues to grow. This was one of the best gigs I’ve ever seen at The Robin, and easily one of my favourite gigs of 2016.