Formed in Nottinghamshire in 1987 perennial nutters Lawnmower Deth brought (more than a touch) of humour to a po-faced scene that often viewed itself as deadly serious. After three-and-a-half albums they went on a lengthy hiatus before reforming in 2008 and virtually reinvented Christmas with a series of fund-raising festive shows. Thankfully, there’s is a joke that never wore thin and after almost three decades (at least they didn’t rush it) return with their latest opus Blunt Cutters.

There was always something unpretentious about Lawnmower Deth (they were like the cooler older brothers I wish I’d had). When I was a teenager with a bottle of cider on drip their debut album Ooh Crikey it’s…Lawnmower Deth was the soundtrack to my juvenile delinquency. Now I’m approaching 50 and hobbling with a stick Blunt Cutters is having a similar effect, and especially opening track ‘Into The Pit’. Getting things off the best possible start it fairly races from my speakers like a supersonic warhead and it’s a high-octane slab of thrash that’s sure to make an equally strong set opener and cause all sorts of mayhem wherever it’s unleashed. Referencing geriatrics and dislocated hips (which is exactly what ageing metalheads should sing about) it proves that Deth haven’t lost their penchant for self-effacing humour, and it sets a quirky tone for the rest of Blunt Cutters.

Back in the day it was almost de rigueur for British thrash albums to have a poor production, often lacking the requisite punch afforded to releases by their continental counterparts. Lawnmower Deth have circumnavigated that problem by having Chris Clancy (Machine Head, Death Angel, Possessed) produce and he’s given Blunt Cutters a warm, chunky sound that turns tracks like ‘Swarfega’ and ‘Bastard Squad’ into bouncing bombs. It’s a production that’s given the band an air of assured authority that was previously absent and I must say it’s a vast improvement. It has also revealed another facet to Lawnmower Deth and ‘Raise Your Snails’ seethes with anger and leaves a trail of destruction in its wake, rather like a plague of gastropods passing over a flowerbed. However, if that sounds a tad serious there’s always tracks such as ‘Space Herpes’ to even things out.

When crossover appeared as the bastardised offspring of punk and metal it seemed that Lawnmower Deth were the perfect amalgamation, and they straddled the two genres effortlessly. Due to its bombastic nature Blunt Cutters leans more towards metal (and that’s partly because of “new” drummer Chris Billam and his aggressive style) but there’s still plenty of punk attitude and street level lyricism with songs about daytime talk show hosts, ‘Good Morning, Phil’ (“You’re a fuckin’ conman”) and Aldi supermarket, ‘Power Bagging’ (“I’m shopping in hell”) and why not? Although Deth never made any overt political statements you always knew their worldview was solid (later evidenced by their work with S.O.P.H.I.E.) and final track ‘Agency Of C.O.B.’ offers an Orwellian glimpse of a not too distant future (albeit through Lawnmower Deth’s blurry lens).

After 1993’s confusing Billy album Lawnmower Deth’s latest finds the band coming full circle to revisit their thrash roots. Belying its title Blunt Cutters is sharp as a razor’s edge and was certainly worth the wait…but hopefully another 29 years won’t elapse before its follow up! 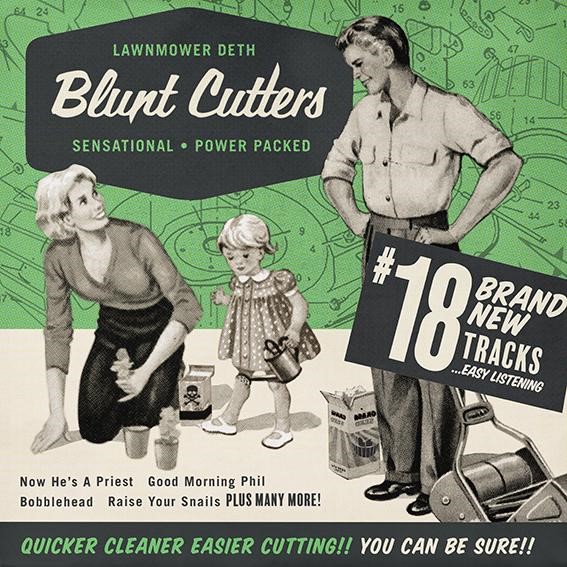