Rock Savage is an unashamed metal album, not metal by today’s standards of course, but the ultra melodic powerful metal of the ‘80’s and the NWOBHM movement. I really enjoyed this album from start to finish and revelled in its old school metal atmosphere, but I do find it a bit of a guilty pleasure and I’m not sure why? Maybe it’s because the songs haven’t been written to appease any genre or modern trend therefore making it an album your reluctant to go, “Hey, this album rocks like a bastard” for fear of nose’s been firmly tossed as high in the air as possible with rolled eyes. But seriously, this might not be a cool album, but damn it rocks like a bastard.

I hate to use the term retro as it seems to have negative connotations within some circles, but the style behind this album is straight out of the NWOBHM stable and should have all self-respecting denim-clad rockers flicking their mullets and dancing rounding their living rooms. This album has been written to be metal with pounding head-banging energy and have that rebellious attitude, but a better description of the music on Rock Savage is melodic hard rock and, trust me, even by old school metal standards, this is ultra melodic.

Although this album shouts out proud with its metallic anthems like ‘Heavy Metal Heaven’, ‘Metal Time’ and ‘Rock N Roll City’, it’s songs like ‘F.O.A.D’, ‘Misery’ and the pompous ‘S.O.S’ that really grab me and show these guys aren’t a one trick pony. Rock Savage contains plenty of pounding anthems that’ll get the head bangers excited and plenty of gang chant-style sing-along choruses make sure the album leaves an indelible imprint on all listeners. I have to make special mention of ‘Where Heroes Fall’ the solitary power ballad and it’s a cracking anthem with soaring vocals from Hume.

I’m particularly fond of vocalist Paul Hume’s vocal style which is really smooth and ultra melodic. Yet he still manages to project the power you expect on an album of this style, to be honest though I much prefer singers to shouters and screamers – no matter how iconic I’m told a band is.

Rock Savage should get fans of Saxon and NWOBHM well juiced up and excited with their old school metal anthems. It comes highly recommended and I’m very much looking forward to digging out a denim jacket, growing a mullet (dungeon master style from Dungeons and Dragons), and rocking along to these guys at HRH AOR 2. 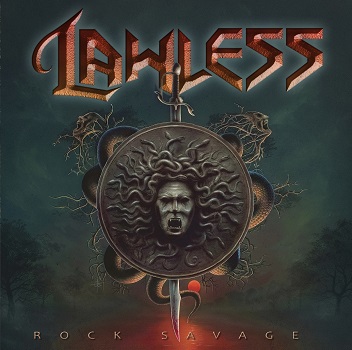