Upstairs at The Hare & Hounds folk are ruminating how many times they’ve seen Joanne Shaw Taylor live, when the next Moseley Record Fair will take place down the road and the extortionate price of a pint of beer up here.

Away from said bar I’m looking at a stage bathed in red light where in front of Laurence Jones’ back drop stand a rack of guitars armed, ready and waiting. Meanwhile crystal balls twirl from the ceiling and Paul Simon plays over the PA. The audience is not only middle-aged blues breakers for a young lad clutches a recently purchased CD from the merchandise stand, and younger girls in mid-riff tops; implying the sun was out today, and that yes, the band we’ll be watching are themselves on the barely-shaving side of the age gap so worthy of mutual visual attention.

And so it is that three young lads dressed in black brush alongside me, climb onto the stage and begin playing a blues soul groove. Then the door behind me opens again and Laurence Jones walks by guitar in hand to join them on stage as they open with ‘What Would You Do?’ There’s a deep fuzz to the organ that mimics the sound of a rhythm guitar, and its player Bennett Holland add harmonies, while Jones’ own voice is strong; deeper than on record and resonant, and with but a brief high tortured guitar solo featured.

“Give it up for Mr Bennett Holland on the keyboards,” cries out Jones of the newly endorsed sponsor of Hammond organs begins playing a prolonged treated piano melody that wouldn’t be out of place on a Keane record before the band join in for a upbeat rock and pop of ‘Don’t You Let Me Go’. Its harmonies and catchy hook lines are appealing and another short solo is delivered with purpose before a series of “Whoa-whoas” call the tune to an end.

Jones’ “Give it up” line will continue with each band member, and bass player Greg Smith comes next – a man who literally spends most of the show with his eyes closed bopping on the spot in time as he makes ostensibly simple patterns infectious beats, and now lays out a resonating chunky line of four string melody while Jones changes guitar. Holland chimes in on clavichord for some skewered funk to ensue with Jones interchanging between nagging guitar lines and svelte melodies. The room is small, hot and beginning to get sticky. The music is intimate enough to carry the full ambiance of the songs across. Gothic organ playing underlines as volley of guitar discord, then scaling arpeggios until the rhythm section come in and a funky rock riff rears its head for ‘Take Me High’, as it does on his new album The Truth. However, live it becomes broader in scope reaching out in the manner of Bad Company or Lynard Skynard for a while, then in the dying embers of the song Smith’s offbeat loud bass line is delightful.

“Are you ready for some blues? Are you feeling the blues?” The singer/guitarist asks before relating writer’s block ceased when a storm outside appeared and we’re offered ‘Thunder In The Sky’, a song the crowd approve of vocally, and presumably the lead track from his full length debut. Aching sustained slow blues guitar licks get progressively fiery, fed by a warm sounding organ, but it’s his emotive voice that keeps you hooked here. We’re content listening along only for things to go quiet then a feedback frenzy ensues folding back into more melodic lyrical line, added wah-wah effects and taking in a more epic solo racing up and down his fretboard, expressing musically more than words can literally express. 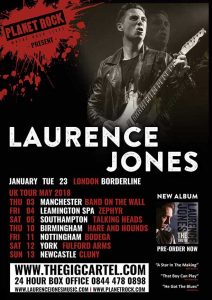 Next we “give it up” for drummer Phil Wilson (who doesn’t look old enough to be in here, but if he keeps time like this over the next few years will have biceps like boulders). A little oddly this leads into that guitar cover extravaganza ‘All Along the Watchtower’ but what they do is make it an ensemble piece about the song. Sure it has something of the body of Dave Mason’s interpretation and the groove factor reminds you of Richie Kotzen’s approach but it’s upbeat; modern, and actually for such a hoary old number quite exciting. Holland’s organ solo punctuates and teases while Jones wearing a smile chimes in on chords playing alongside Smith before soloing on his six-string to fine effect.

Going for party populism now they follow with ‘Keep Me Up At Night’ then really get into things with ‘Give Me Your Time’ – Much sexier live a real thigh dance grinder. Changing pace for some quite beautiful electric piano and sighing lead vocals is the slow blues of ‘Can’t Go On Without You’. Eyes closed as he solos, Jones stands precariously close to the edge of the stage then opening them begins to sing without the use of microphone, his words echoed by Holland. The band bounce back with ‘Take Me’ and Jones then asks us if we’re ready for some rock and roll and we’re offered the speedy hard rocking ‘Foolin Me’ where Holland makes out like Jon Lord before the song slows down to a more Free like pace albeit that the guitarist is whizzing about on his guitar and unleashing feedback as he roams from one side of the stage to the other. Announcing they’ll perform one more number ‘What’s It Gonna Be’ begins pumping away like another earnest rocker with Jones’s hammering on his guitar, working its way to an end that finishes with a groove not too far removed from that the band played when they first walked on stage, and with that they do walk off. All save for Holland who proceeds to play gentle piano while crooning away wordlessly until the band returns in full to encore.

Jones invites us to sing along and that the words are easy, “I will, I will keep on loving you” while its overall chord structure doesn’t feel too far removed from ‘All Along The Watchtower’ there’s a distinct R ’n’ B flavour to it. Disturbed by a small circle at the back who’ve been talking among themselves during the night, Jones asks them to have some respect for those trying to listen and they throw some poor attempts at humour back at him. He retorts back, polite but defiant. I look around and there’s no security, but the frowns from audience members turning to look at them puts them in their place and they begin to leave, as the singer explains this final song means a lot to him, being about someone who died in a car crash. One’s own thoughts are that this might not be a jolly way to end the night, but it proves an involving number that starts off predictably light of tone until the full weight of the band comes into flow as Jones solos long with variety and passion before the song reaches its conclusion, and so too the show.

I quite like The Truth album but live this band has a fine strong sound that allows Laurence Jones to perform to his strengths. He’s a classy and inventive guitar player and good skilled singer – I daresay if he ditched the guitar and got himself the right media manager he could make a fortune on the pop circuit because he’s a damned sight better than the current bunch whose records I’ve seen being touted during TV commercials. Let’s be thankful, he’s not. Tonight’s performance was top notch.

Alas, The Hare & Hounds venue loses a few brownie points. I’ve had a drink or two in there over the years, and have heard from friends who live locally that’s it’s a great place for live music these days and simply haven’t got over there until now. Alas, the lack of upstairs security, as minimal as the requirement might be is an oversight that should be looked into, so too the dimmed lighting as we descend the staircase the last thing you need is punters falling down them. That said, we all got home safe and I get to tell you to check out the Laurence Jones Band live.