I don’t know what’s happening in Portugal but it’s quickly becoming a hotbed for some of the best heavy sounds and the latest band to come on my radar are thrashers Last Piss Before Death. Harnessing an unbridled aggression and setting it to a ferocious sound makes for an intense listening experience and marks Last Piss Before Death as one of 2022’s key releases.

The great thing about thrash metal (when it’s played properly) is that it’s derived of all fancy frills. It’s raw and violent and, just like hardcore punk from which it was birthed, gets straight to the point and that’s certainly the case with first shot ‘Electric Ballroom’. Last Piss Before Death arrive like an invading army and this album could easily soundtrack a world perishing in flames. João Gama’s drums combine with Eduardo Caturra’s bass to replicate the sound of heavy artillery while Pedro Lourenço’s guitar riffs crunch along like tank tracks and when you factor in Edgar Alves’ barked vocals you have an explosive concoction. It’s a take-no-prisoners approach that’ll appease metalheads and crossover fans equally.

With the dexterity of early Metallica, the punch of of Hatebreed and the aggression of Slayer Last Piss Before Death is an album that comes out with all fists flying and ‘Restless Void’ delivers a succession of heavy blows. With a distinct lack of guitar solos, the relentless riffage adds to the overall feeling of brutality and turns ‘Restless Void’ into a musical timebomb…and you feel it could detonate at any moment. The band have self-produced this album and they’ve given themselves a nice weighty sound and it could easily swing with the likes of Crowbar and Eyehategod. It’s a crystal clear and separates all the instruments which makes its full-blown sonic assault rather easy on the ears.

Last Piss Before Death is a record that’s split into two distinct parts and the second half veers more towards the band’s thrash oeuvre. With that classic Bay Area crunch ‘Tear Down The Walls’ is a fantastic slab of foot-on-the-monitor metal that seems tailor made for stage diving and slam dancing. It’s a track that finally lets the guitar loose, and while I’d liked to have heard more solos on this album this song more than makes up for it with some shredding that lights up the sky like phosphorous flares. Wheeling out the heavy artillery and bringing the album to a suitably frantic conclusion is the aptly titled ‘War Ahead’. Offering little in the way of redemption it offers a frightening glimpse of a not-too-distant future and it’s a warning we should all heed. 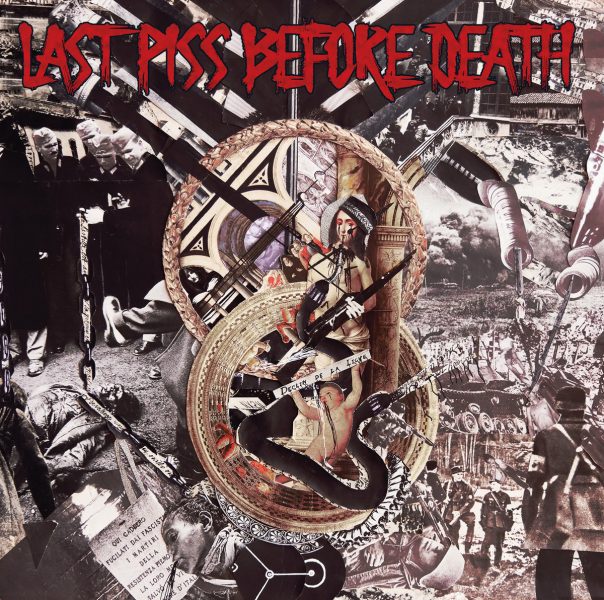