Blues Rock – it’s a tough one to nail. A great deal of what purports to be blues rock is just, well…rock. You sit (or stand) and listen and scratch your head, wondering where the blues is at. Some seem to name check it in the vain hope of gaining some authenticity and authority. Others pay it lip service by adding a cosmetic dash of harmonica or slide guitar. As we’ve established, it’s a tricky highwire to balance upon.

Not so, however, for Lance Lopez. Musically, lyrically, spiritually, the blues runs through to his core. And ‘Tell The Truth’, his latest release, rocks – equally as convincingly and naturally. It’s proper roadhouse stuff – written and performed by a blues lifer at the very top of his game. And, as with the best blues, it’s autobiographical. Years of life on the road, and all the temptations that go with it, almost derailed Mr. Lopez, but he pulled himself back from that particular precipice and here he stands, fitter, sharper, and able to reflect with hard won clarity.

This album is unsparingly honest, knowing, thankful and tough. Lopez and his band are playing with years of experience behind them – tight, hard and raucous. His voice has never been better, it’s soulful, thoroughly lived in – you just know there’s no bullshit here – he’s seen and done everything he sings about here…ten times over.

There are many cautionary tales about the rock and roll lifestyle, set to some mean-ass riffs. The backing vocals add an extra soulful dimension while, as good a guitarist as Lopez is (and he’s played with everyone from Buddy Miles to Warren Haynes) he never showboats – there’s no need, he knows how good these songs are, they can stand on their own.

There’s also a strong Southern edge to these songs, as you’d expect from a Texan. There’s Allman groove and Skynyrd grit all over these tracks. ‘Raise Some Hell’ has a gruff country twang, it wears its outlaw heart on its sleeve. The Freebird-esque intro to ‘Blue Moon Rising’ leads us into the closest we have to a slow song – powerful, kinda chilled and blessed with a Hendrixy solo.

Billy Gibbons mentorship of Lopez shows itself in the greasy funk and wicked lil’ fx-driven solo of the title track while ‘Back On The Highway’ is as boogie-tastic as it’s road hog title suggests – Lopez and co. could play this stuff all day long, and you kind of hope they will.

“What you see is what you get and that’s just where I’m at”, howls Lopez at one point and that’s this album in a chrome-plated nutshell. Ballsy, unapologetic and glad to be alive, it’s a career best. Its crunching brilliance, both in songwriting and execution, make sure that you won’t forget this in a hurry. Brilliant, genuine, feelgood, real-deal blues rock. 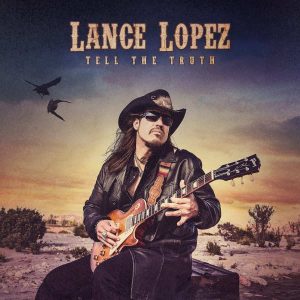