Radical (in many ways) Los Angeles’ four piece punk group L7 wrote a whole new chapter in rock. An all female band who invaded a masculine industry they arrived with all guitars blazing and out rocked their male peers. Collecting three mid career album The Slash Years (1992-1997) is a timely reminder of the revolutionary nature of rock.

It seemed the stars finally aligned for L7 in 1992 with the advent of the whole grunge and alternative rock revolution. Fully grasping the cultural zeitgeist Bricks Are Heavy doesn’t waste time on preliminaries and the aptly titled ‘Wargasm’ arrives like an irradiated warhead. With one of the sickest riffs known to man it’s a steamroller that flattens all in its path, factor in some vocal flailing from Yoko Ono, a lyrical astuteness (“Tie a yellow ribbon round the amputee”) and you have a pretty heady concoction. ‘Pretend We’re Dead’ was the single that broke L7 and it’s presented here in all its four minute glory with a stuttering, Morse Code guitar line that sent an urgent message to a whole generation.

Produced by Butch Vig (Nirvana, Garbage) Bricks Are Heavy was the perfect title for L7’s third album. With a riffy, chunky sound each song is an impenetrable, well crafted wall of sound that stands vast and immovable. Often lumped in with the whole grunge movement L7, with their roots in the LA punk scene were about so much more. From the Sabbath like crawl of ‘Diet Pill’ to the Cramps-on-speed ‘Mr. Integrity’ this is album that incorporates elements from alt rock to metal and calls at all points in between. A smorgasbord of all that’s heavy and good Bricks Are Heavy is an era defining album.

Four bonus tracks are added including an edited version of ‘Pretend We’re Dead’ but it’s the three contemporary B-sides that are most illuminating. A cheeky Guns N’ Roses cover subverts gender roles which renders ‘Used To Love Him’ slightly unsettling while both ‘Freak Magnet’ and ‘Lopsided Head’ illustrate what a rich seam L7 were mining and could both easily slip into Bricks Are Heavy.

Hungry For Stink followed two years later but it could quite easily have been two weeks. It’s a slightly heavier L7 with their twin guitar attack dropping a barrage of power chords that detonate amongst Demetra Dee Plakas’ thunderous drumming. An insane touring schedule (supporting Hole and Nirvana) has left the band sounding a little jaded and world-weary but that’s an attitude that perfectly suits the fiery nature of Hungry For Stink. Heavy on the distortion pedal ‘Andres’ is the skull cracking opener that throws steely knives towards the listener. Some primal, throat-shredding vocals only add to the chaos and suggest you strap yourself in for a bumpy ride.

L7’s fourth album is basically a continuation of its predecessor. While certainly no facsimile Hungry For Stink doesn’t break new ground and the reworking of former B-side ‘Freak Magnet’ suggests the band were running low on original material. However, what stops this effort from becoming Bricks Are Heavy Part II is Garth “GGGarth” Richardson’s production. Using all the tricks at his disposal he’s created a deep, multi-layered album that adds a real punch to L7’s message. Songs like ‘She Has Eyes’ and ‘Shirley’ raise two fingers to an uncaring, patriarchal society and while the songs occasionally give the impression of a band treading water but, when you’re in the middle of a riff-fest, it hardly matters.

Included are four contemporary bonus tracks that largely lack the quality of those on the first disc; a fifteen minute interview (you’ll only listen to once), a live version of ‘Baggage’, and an edited ‘Stuck Here Again’. However, the excellent B-side ‘Punk Broke (My Heart)’ is worth the price of admission alone.

1997 found L7 beating a new path on The Beauty Process: Triple Platinum. Long term fans needn’t worry as there’s no drastic departure only a stripped back sound that removed much of the bells and whistles that cluttered Hungry For Stink. ‘The Beauty Process’ is the briefest of introductions that stomps all over your speakers like an angry giant before the musical explosion that is ‘Drama’ delivers as series of blows which leaves the listener a little punch drunk. The Beauty Process benefits from its deconstructionist approach and reconnects the band with their art-punk roots which allows them to explore new territory from the discombobulated surf of ‘Moonshine’ to the dark and oppressive ‘Bitter Wine’.

Sounding more confident than its predecessor The Beauty Process brings the bands humour to the fore, most notably on the excellently titled ‘The Masses Are Asses’ and the drummer-on-a-cliff-edge closer that is ‘Lorenza, Giada, Alessandra’. In between we get some hot rod action in the shape of ‘Bad Things’ and ‘Must Have More’, a bruiser that could quite possibly swing with Corrosion Of Conformity. For all it’s new approaches The Beauty Process is an album that rocks hard and when held up to what today constitutes as punk, it makes it all seem gutless and weak.

I consider B-sides as a litmus test to where a band stood creatively: the stronger the B-side, the stronger the album is a good rule of thumb. Both ‘Guera’ and ‘Worn Out’ were album out-takes (and used on the flip of ‘Off The Wagon’) but they’d each be at home on their parent album. While the aptly titled ‘Drama (Piss Off Version)’ brings this set to a suitable conclusion and finds L7 departing with a two fingered salute. 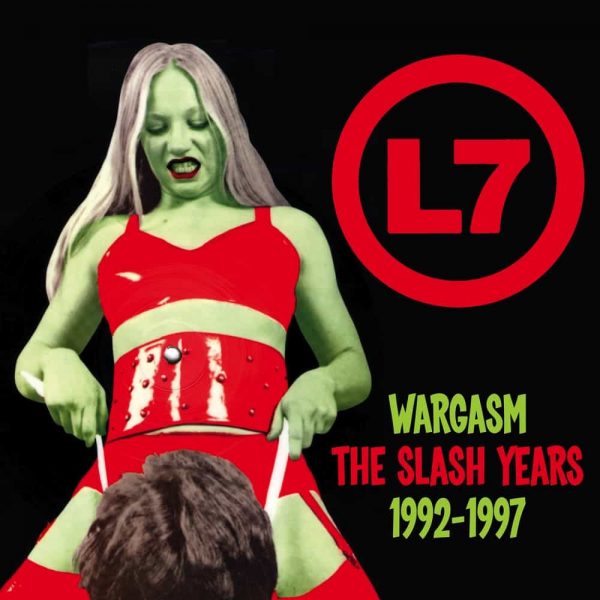