“It’s great to be supporting L.A. Guns again”calls out the Phil Lewis lookie-likie on stage. A four piece from Ireland, Stone Trigger deliver meaty rock with throaty hooks. They’re playing a number of tracks off their new album, Edge Of Insanity here tonight; ‘Show Me Around’ they dedicate to Phil Lynott, featuring a chunky bass and modern mainstream rock guitar sound, ‘Edge Of Insanity’ itself has a more epic Heaven & Hell vibe, and despite the guitarist’s six string packing up as he’s about to solo the singer susses the situation and keeps the momentum going, working the crowd all power to him, before things are sorted and they finish to some healthy applause for such an early evening slot.

“Hello! How’s everybody?” calls out Jared James Nichols, so familiar a face on these shores now you’ll have seen him guesting with one act or another all over the shop in recent years. So we’ll get tunes we’ve come to know live with a focus on his latest album Black Magic and the same power trio format, except he looks to have changed bass player; Gregg Cash the guy handling it being a tall string-bean with a main of wild hair and beard.

‘Gonna Take You’ is rock and roll, ‘Don’t Be Scared’ has Nichols and Cash facing off like a pair of wolverines as they and drummer Dennis lay into some crushing blues, with a solo that’s pitched halfway between Joe Walsh and Ted Nugent histrionics before entering a broken chorded rocking slower blues with melodic sustain and feedback to end the piece. There’s a music video just out for ‘End of Time’ the main man tells us and it comes across live like a heavy slab of Mountain with a guitar solo that goes off like a police siren chasing down a murder scene.

‘Baby Can You Feel It’ is a wonderful slice of heavy grinding boogie, played with particularly strident chords tonight. It’s a crowd pleaser come sing along in the manner Pat Travers’ take on ‘Boom Boom Out Go The Lights’ for those older readers among you. As the backbeat throbs away Nichols stands centre stage throwing shapes and emitting a number of favourable sound and styles within the framework of his solo. “We’re going to get funky” he declares next, but ‘Honey Forgive Me’ is more a stomper featuring both a drum and bass solo, it’s followed by the heavy riffed crush of ‘Gotta Push’ and the expected finale that is a cover of Mountain’s ‘Mississippi’ Queen, powerful tempered with screaming licks, guitar tricks aplenty playing it aloft and away from him, running both hands up and down the fretboard before it all ends big time and he jumps down from front of stage ready to meet folk at the merchandise stand.

It feels a long wait before the main act come on, Ozzy Osbourne’s ‘Diary of A Madman’ playing over the PA as we look blankly at a stage bathed in blue light watching a roadie check out equipment. With the houselights also on we begin to look blankly at each other. The song is dreary and the ambiance bolstered by strong supports acts is being lost. Then, as male choirs evoke hammer movie mode on the Osbourne number the stage lights dip, followed by our own and a guitar roars out as we see more black hair dye on stage than the whole of The Rolling Stones last UK tour. Still, it can’t be denied L.A. Guns look in exceedingly good nick. 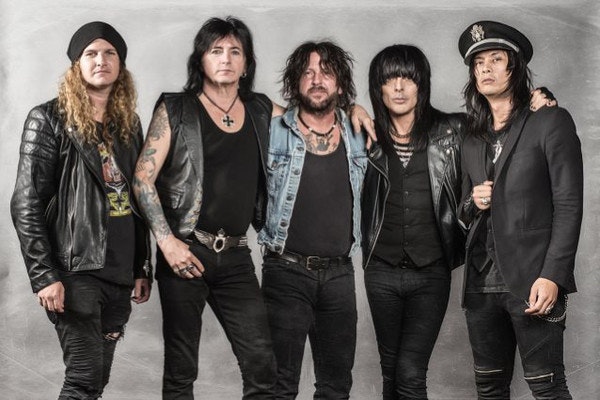 Phil Lewis is strutting centre stage in a sleeveless black leather jacket and top hat, Tracii Guns wears a denim cut-off and a taught beard that has him resembling Paul Rogers while casting a Jimmy Page pose. Bass player Johnny Martin looks like Pete Way would if he’d joined The Ramones, less awesomely rhythm guitarist Adam Hamilton wears a porkpie hat and the drummer Shane Fitzgibbon’s a seasoned Sunset Strip blond. I think I’ve got all their names right, but whatever collectively they pack a punch, and well above their weight.

‘Gypsies’ is their second number skipping out hard and tight. It rocks chunkily and cheeky with some murderous chords and the whole band adding harmonies.  Lewis goes off stage as Guns picks up a violin bow and lays it down over his guitar. I’m thinking this could make me cringe and while there are the obvious echoes of Page on ‘Dazed & Confused’ he applies scales favoured by those like himself who followed in the wake of Eddie Van Halen, he’ll also be applying a theramin later in the show. It segues into ‘Over The Edge’ that again features an unexpected taste of  Zeppelin about it but the harmonies shake this up casting it more towards hard AOR  Second verse in Lewis is really giving it some, accentuating lyrics, phrasing cool and wittily. All good singing while twisting and turning to keep our visual attention.

‘Sex Action’ storms forth next with a heavy grind, Guns holding his guitar aloft while soloing as the Robin crowd “Talk about Love” singing along heartily with the band. There’s a big cheer at the end, allowing Guns to change guitar and Lewis to announce that he’s going to dedicate the next number to “A very special girl out there… but I’m not sure who she is yet!” ‘I Wanna Be your Man’ – swings and rocks with rather poppy feel to the chorus. This being The Missing Peace tour the proclaimed former protagonists of Lewis and Guns look to be getting on well, and Lewis declares the next track is from the new album and has a “’House Of The Rising Sun’ vibe” – Well with Guns picking through notes on chords I guess so, but it’s more a gospel driven power ballad to these ears. More echo is added to Lewis’ voice and it’s fun to hear the British accent slipping in between US rock lingo.

Lewis hasn’t got what you would call a powerful voice, but it’s on form and he delivers it with a good range tonight. Guns proves to be a hidden surprise, playing like Randy Rhodes having a love affair with Jimmy Page; he’s an impressive player. That stated the next number borrows a trick or two from Deep Purple’s ‘Highway Star’ from its thumping bass line to Lewis even sticking in the line “Mt big fat car”. Mind you, whether it’s actually about cars or amphetamines I’ll leave up to you. It rollocks hard, has an eighties-driven linear riff stamped all over it, flouncing about like a stripper happy in her work removing her bra, with meaty backing and sound lyrics to boot. A brilliant couple of minutes let me tell you.

Lewis shuffles off stage to give room for others to jig about when solos take place, as he does now as all the guitarists face their amps to unleash a torrent of feedback. Then Guns plays a zipped-up riff as they all dig in on a meaty chugging riff, Lewis signing in his higher register comfortably and also yodeling, feigning orgasm and screaming in that order. The result? Much applause at the end.

Guns rocks up some blues licks then double taps out the harmonics before these sleazy fine men add vocal harmonies more akin to a Phil Spector girl group style while the overall barrage of sound merges into a psychedelic eastern beat for ‘Malaria’. The overall effect is like a tank rolling over a sandy desert with a hard-on. I swear they play the opening chords to AC/DC’s ‘Rock & Roll Ain’t Noise Pollution’ before playing a song reminiscent of early UFO, but it’s a Tuesday night and I’m up late. Guns changes to Gibson as Lewis informs us next up is “a song about a girl called Jelly Bean”. It opens in the broken chorded faux country rock manner of the Stones’ ‘Wild horses’, the crowd with hands in the air swaying, yet more strong harmonies offered, and a sweet bluesy rock solo too. Stone Trigger’s vocalist appears on stage briefly to sing at the mic with Lewis, then L.A. Guns’ vocalist asks the audience to show a little love for those on stage, announcing each band member before concluding with “And my husband… Traci Gunns!”

It’s Hamilton who starts off the hefty hump of ‘Rip & Tear’ though Guns ensures he inserts a hyper speed solo for good measure. And that’s it, they bow and away of stage they go, no encores tonight.

Was this sleaze rock? Well, it was classic hard rock with its boots dragged in Sunset Strip’s gutter I’ll give you that. Tonight L.A. Guns were tight as a duck’s arse (as revealed in a scientific journal, honestly). They came and gave you your money’s worth and a little bit more with their performance. If they can stick together and continue to leave whatever ego busts took place in the past  count me in as being in the front line to catch them live again.