Formed in 1983 at the height of the Los Angeles Glam Metal boom L.A. Guns would only settle on a firm line-up after guitarist Tracii Guns abandoned his attempt to form Guns N’ Roses with Hollywood Rose vocalist Axl Rose. Rose went on to have a little success with the band they formed while Guns returned to L.A Guns eventually settling on a line up of Guns, Mick Cripps, Kelly Nickels, Steve Riley along with former Girl vocalist Phil Lewis. This is the line-up which in 1989 recorded Cocked and Loaded their second gold certified album following the self titled 1988 debut. Cocked and Loaded contained no less than five singles including MTV favourite ‘The Ballad Of Jayne’ and included guest appearances from Ted Nugent and Derek St. Holmes as well as Cheap Trick’s Rick Nielsen and Robin Zander. Everything came together to make it their top selling album and it has become a hair metal classic.

While the live music scene was in lockdown the current Phil Lewis & Tracii Guns line-up featuring Ace Von Johnson, Johnny Martin and Scotty Coogan (Steve Ripley performs with his own line-up) decided to throw some shapes in celebration of its 31st anniversary by performing the album at The Fremont Country Club in Las Vegas to be streamed to a worldwide audience. It may seem a strange time to record a live album especially one which contains an album in its entirety which has already been re-recorded (2000’s Cocked And Reloaded) but this heavy touring band felt the need to blow off the cobwebs and climb back onstage.

So it’s straight into opening track ‘Letting Go’…but no, for some strange reason the band decided to drop this short opening track while playing the album in it’s entirety. So we go straight into second track ‘Slap In The Face’ which immediately shows that Guns, Lewis and their current crew are still on top form with Lewis’ voice showing the edge gained from years in the studio and on the road. First of the five singles plucked from the original album ‘Rip And Tear’ was a massive rocker back in ’89 and has only gained in power over the years. At it’s climax the crowd go crazy… well I’m sure they did in their homes? Following a slight mistake from Lewis over the set’s running order the band break into ‘Sleazy Come Easy Go’. Not the bands finest moment with it’s Mötley Crüe light attitude it struggles to sit along the likes of ‘Rip And Tear’ and the following triple single assault of ‘Never Enough’, ‘Maleria’ and the ever classic ‘The Ballad Of Jayne’. I love this stripped down version of the huge MTV hit and it allows the band to wind things back a little.

Very soon we are back to rocking with the galloping rhythm of ‘Magdelaine’ and ‘Give A Little’ before the second glitch in the “album in its entirety” promise when the guitar solo that was ‘I’m Addicted’ is (with no explanation) replaced by ‘Speed’ from the 2017 The Missing Peace album. Don’t get me wrong it’s a good tune but just seems a little out of place here and begs the question… why nothing from the latest album The Devil You Know from 2019? Back on track with ’17 Crash’ the highlight of which is a stunning solo from Guns and surges straight into ‘Showdown (Riot On Sunset)’ which displays the depth of this version of the band. Here they are full steam ahead at their biggest and brashest. ‘Wheels Of Fire’ is a competent rocker which is saved by another of Guns incendiary guitar solos before the final hoorah and last of the singles ‘I Wanna Be Your Man’, which affirms just what a great album Cocked And Loaded was back in the day. “Thank you so much” says Lewis before the silence tells the true story of this lockdown event. Despite the lack of an in house audience the band appear to give 110% and I’m sure they will be overjoyed when they can get back to touring and do it for real once more.

Despite the minor set list anomalies this “Live” release is a worthy option to its original version and is in my opinion a much better addition than the Cocked And Reloaded release. With issues over the rights to the L.A. Guns name now apparently resolved (Steve Riley’s version will use Riley’s L.A. Guns), a deal with Frontier records in the bag and with a new album Checkered Past recorded and due to hit the online stores later this year there has never been a better time to revisit L.A. Guns at their peak. Available on CD and Limited Red Double LP (unfortunately no DVD/Blu-ray) this is Hair Metal at it’s best. 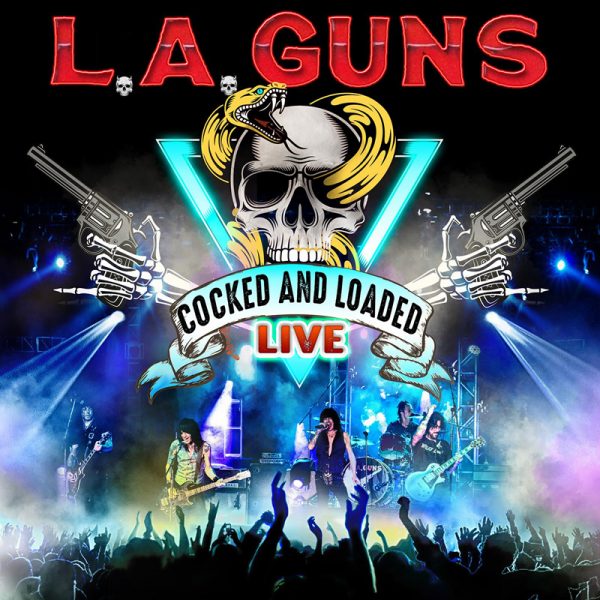