Back in 2011, when a new release by reunited Seattle alt-rockers Soundgarden was confirmed to be on its way but no one knew when, the debut album from California’s Kyng seemed the closest we were going to get to Cornell and co.’s distinctive concoction of heavy metal, absorbing melody and inflections of Beatles-y psychedelia that year. But Trampled Sun wasn’t mere pastiche; it was a work laudable in its own right, a rollercoaster of a metal album made all the more exhilarating by its unpredictable twists and turns. Their new effort, Burn The Serum, by contrast rounds off the more extreme edges of heady psych and unapologetic thrash for something that feels more stylistically concise, if not as thrillingly uncertain.

This refinement by no mean damages the material, however: instead we see more all-out assaults, straight-up melodic rockers and songs that adeptly combine the two. The opening title track unleashes the fury as good as Kyng might: it thunders forth like a hyper-charged Black Sabbath, urgently followed by ‘Lost One’’s hard driving rock; the penultimate ‘Big Ugly Me’ similarly pulls no punches, with frantic verses and a thrashing chorus. Kyng’s more conventional rock side is represented by songs like ‘Faraway’ – as sure a statement as any that Kyng are Soundgarden’s sunny SoCal equivalent – and ‘Sewn Shut’, which boasts the album’s most compelling refrain. Elsewhere, tougher verses driven by muscular chugging (‘Self Medicated Man’) or locomotive riffage (‘Sunday Smile’) are treated with the analgesic of a melodic chorus. This meeting of headbangable riffs and strong melodic hooks should make a big splash with fans of the likes of Black Stone Cherry and Slash’s work with Myles Kennedy, while there are still enough nods to classic metal in tracks like ‘The Ode’ and ‘In The Land of Pigs’ to sate slightly heavier tastes. Guitar solos are used sparingly, but where they do appear, as in the last two aforementioned numbers, they’re laser-hot and fit for lethal purpose.

And so that leaves ‘Paper Heart Rose’, Burn The Serum’s soporific acoustic ballad, a gentle finale made only to feel inessential by the intense, drum-riddled coup de grace that terminates ‘Big Ugly Me’, which surely would have made the album’s close a far more resounding statement. As it is, ‘Rose’ only leaves you craving more action. The solution? Press play, then repeat as necessary, of course… 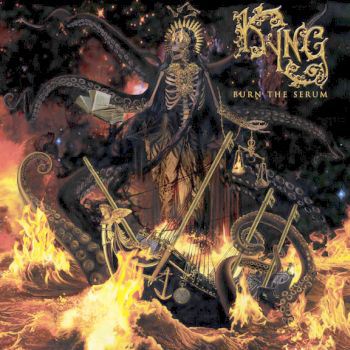