Yes, he of the OTT and not-entirely politically-correct Tenacious D…

You weren’t expecting a mature acoustic smooth-jazz album here, were you? Having first made his name in the totally OTT and not-entirely politically-correct Tenacious D with Jack Black over twenty years ago(!), Kyle Gass has pulled his own band back onto the road for the re-release of their 2013 debut LP.

Whilst as a whole less out-and-out comedic than the D’s output, The Kyle Gass Band meld smile-inducing lyrics with ‘just the right side of cliché’ riffery to produce a very listenable rock ‘n’ roll package. There’s comparatively few of the giggling-schoolboy-style knob gags (despite opener Manchild‘s delectable “Can I please move in with you / I just learned to shoot my goo” couplet), and there’s even some bordering-on-adult commentary on life in a band (see: Our Job To Rock, Getting The Band Back Together).

It’s not pushing many boundaries (although the pan-pipe solo on closer Gypsy Scroll is beautifully done, and the band aren’t afraid to throw in a few other instruments unlikely to be found on most rock records either for musical effect or sheer shits ‘n’ giggles), but that’s really not the point of the Kyle Gass Band; it’s well-crafted guitar-based songs with excellent production and a wicked sense of humour underpinning it all.

As part of a pre-weekend-night-out soundtrack this LP would be hard to beat for a rock fan looking for something familiar but with a bit of a twist, and it’s pretty much a must for anyone who first came across K.G. with Tenacious D but can do without the inter-song audio sketches, or those who might find Steel Panther just a little too risqué. Whether the ‘ironic’ appreciation of classic rock is going a little far is a debate for another day – for the time being, give this a spin at your next rock ‘n’ roll barbecue for a soundtrack that won’t need the kids’ ears covering but will still prompt beer-spurting laughs from those who haven’t heard it yet. A little more mature than Tenacious D, perhaps, but none the worse for that. 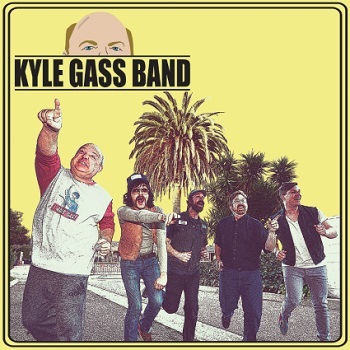