This debut EP from Sheffield trio Kurokuma is a weighty item indeed, and one that will nestle well in the collection with fans of the likes of Conan, Slabdragger and Garganjua. Advorsus is Latin for ‘against’ (although I’m no scholar!) but as such the title represents Kurokuma’s general antipathy to most of what happens around them.

First of the three tracks ‘Lust’ opens with all the subtlety of Godzilla stomping round BHS trying to nab a few bargains on their final day of trading. It’s a monster alright and the pounding beat is akin to his footprints thudding across the by now barren shop floor.

As the song title is ‘Lust’ the song is probably not about BHS, or indeed any other iconic name from the British high street. It is though an absolute wedge of primal energy powered by cavernous-like grooves and pounding drums from the bottom of the well.

Jacob Mazlum’s vocals are terrific, completely untamed, so raw that if it was a lamb chop to eat it would gurantee a one-way ticket to the doc. In fact ‘Lust’ is almost worth the admission money alone, a driving beast of a song.

‘Dark Triad’ slows things down with a fuzzed riff accompanied by an almost tribal beat before the mood turns, Mazlum spews forth more guttural grumbles and a sea of dark waves start to pour forth, a solitary razored riff at one point standing bravely alone before the gates open and the aural onslaught spills over once more. After having a pretty solid grip on your internal organs for a few minutes, the song eventually descends into a psychedelic whirlwind.

Final track ‘Kali,’ about the Hindu goddess, sees Kurokuma swing the sludge sledgehammer with ever greater enthusiasm, bellowing burp –like cries adding a neat bestial touch at just the right moment.  The guitars are so fuzzed up you almost have to give them a shakedown while the methodical plod of the beat shows that these Yorkshiremen refuse to be rushed.

Advorsus is issued digitally and on a limited cassette run with a running time of just over 20 minutes. 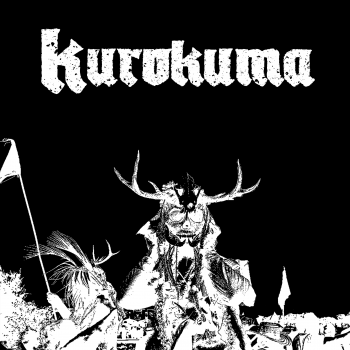