Kuolemanlaakso’s The Gothic Tapes – Vol 1 was released via Svart Records on August 26, 2016 and is reviewed by Paul ‘light the candles’ Castles

Kuolemanlaakso may be the kind of hotch-botch hand that would leave your nan struggling on Countdown but don’t let that deter you from exploring The Gothic Tapes Vol 1.

The band name actually translates as ‘Death Valley’ although this release is nowhere near as hostile as that bleak and barren badland . When Markus Laakso formed what was initially a solo venture in 2010 the sound was as thick and dark as some of the dense Finnish foliage that inspired many of the songs. The positive response was such that Laasko opted to expand his horizons, forming a full band unit with the addition of four like-minded individuals.

After three releases by Kuolemanlaakso with the full band, Laakso has wound the hands of the clock back to record this album himself, a decision at least in part possibly due to the band’s singer Mikko’s other commitments with Swallow The Sun. That said, Laakso was not without support, notably the band’s regular producer Viktor Santura (of Triptykon) also sharing guitar duties on the album.

While Kuolemanlaakso’s musical focus usually carrys segments of death metal and doom, as the title suggests The Gothic Tapes is more of a black lace and eyeliner package. The other sea change is that this offering is sung entirely in English, whereas previous Kuolemanlaakso work was recorded in their native Finnish.

When the opening grooves of this album kick in you’d be forgiven if you thought you were listening to Paradise Lost, as the first foray of grooves start to spread their wings. The vocals though show you that Kuolemanlaakso are no pale imitators. In fact the opening ‘Children of the Night’ is compulsively addictive with singer Laasko’s larynx much more like Pete Murphy (check out Bauhaus you young ‘uns) than Paradise Lost’s Nick Holmes.

Laasko’s voice on ‘Roll the Dice with the Devil’ is richer than a Red Velvet gateau and probably has more layers. This is an album that is very easy to embrace with sonic waves warmer than a hot water bottle.

The rhythms have an easy 80s bounce about them, keyboard intros straight from the hymn book of some of Depeche Mode’s darker work while the Sisters of Mercy influence on songs such as ‘Where the River Runs Dead’ is palpable. If nitpicking then the slightly fey chanted chorus ‘red dress white thighs’ is a little loose and perhaps conjures a few 80s reference points that are probably best left gathering dust at the bottom of the wardrobe.

That is though one of the few criticisms of what is a vibrant gift from the Scandi goth gods. The tempo throughout is mid-paced and while the deep manly baritone envelopes every aspect of this release there are a few diversions with Helena Haaparanta of Crimfall fame contributing backing vocals on ‘The World’s Intolerable Pain’.

‘No Absolution’ has less of the Goth flavor and in fact is much blacker with the clean rich vocals replaced by a snarling bestial growl much more in keeping with what Kuolemanlaakso  have been recognized for in the past. What follows on ‘Deeper Into the Unknown’ could scarcely be more of a contrast, the soft vocal tones of Haaparanta majestic in what is almost a lullaby, Laasko just contributing an almost cameo role, blink and you’ll miss him.

The album closes with the symphonic slowburner ‘My Last Words’, Laasko’s gruff vocals barely making the transition between speech and song, in fact very much like the great antipodean artist Nick Cave. Just before the midway point the dimensions shift as the desperate parting shot of ‘These are my last words so please here me now’ triggers an emotive explosion with riffs raining down like teardrops.

If we’re to assume that by labelling this album Volume I that there will be a Volume II, then that has to be a good thing. 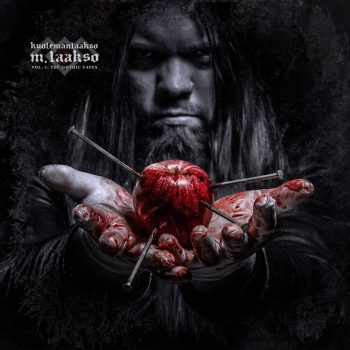