Judging by the wonderful ovation offered up to Kroh at Bloodstock in August their inexorable rise to whatever passes for success thesedays continues unabated. And so on the back of their debut breakthrough album Altars, and Sophie Stage conquest at Catton Park, the Birmingham doom outfit return this week with a five-track EP every bit as scintillating, sensual and strident as what they’ve delivered to date.

Pyres’ opening track is the instrumental ‘Triumph of Death,’ which marries light and shade neatly, carrying the juxtaposition that goes hand in hand with Birmingham’s brightest underground artist. A soft dissonant drone sets the pendulum ticking before an almighty crash elevates the second half of the track to an altogether more forceful and threatening dimension.

On ‘Rigor Mortis’ we’re treated to a vibrant and visceral volley of lightning rhythms, purposeful engaging riffage and of course Oliwia Sobieszek’s sparkling delivery that ensures this number will quickly establish itself as an instant crowd favourite. Rigor Mortis never felt so good. There are some hooks here big enough to hang the washing on for a week, some crushing sonic cuts with the Polish-born singer providing the fulcrum as the pace gathers towards a majestic maelstrom of melodies. 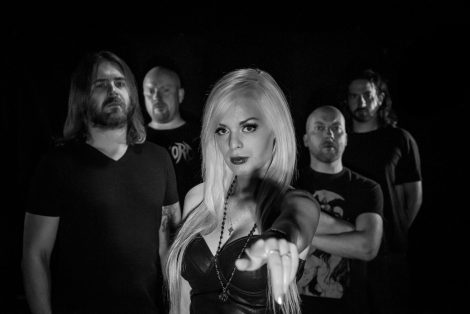 But don’t kid yourself that Kroh have deserted their doomier inner self entirely. They certainly haven’t.  ‘Nemertean Girl’ has a much more reserved feel, the tempo brought down to something approaching walking pace by a deathly sullen bass intro. There are some haunting streams built into the sound and when Oliwia begs, ‘girl, you shouldn’t play with fire,’ you almost feel the need to pull the pin on the fire extinguisher as the atmospheric aesthetics circle overhead like puffs of smoke.

At seven minutes, ‘Moriah’ is the longest track and the most disturbing, beginning with a thumping tribal beat with a sinister choral collective hovering above the opening rush. The mood remains despondent throughout, the blasts weighed down seemingly with grief. At the midway point the reins are loosened to allow a great rhythmic chug to take command, Oliwia briefly scurrying off to the shadows as her three band members punch away with testosterone levels raised. ‘Moriah’ closes in a heady haze, with just a few feint vocal lines from Oliwia as the end approaches.

While band founder, and ex-Fukpig and Mistress maestro, Paul Kenney has made no bones about Kroh being unashamedly populist in their approach to making music, final track ‘Despair – Resolve’ reasserts the dark underbelly that will never be too far from the tortured textures Kroh sublimely piece together.  Certainly the ambient strings caressed on the closing instrumental composition hint at a much darker side, introspective, inward and one happy to curl up almost in the foetal position.

In fact, despite Paul’s previous protestations about Kroh, Pyres remains a slowburner in every sense. With the exception of the rapturous ‘Rigor Mortis’ (video above) this EP is an exploratory exercise inextricably and satisfyingly drawn towards the dark side. But remember kids, never play with fire.