Kris Barras is riding the wave of quite a success story. His previous album was launched 18 months ago with a celebratory gig in front of a ‘select’ gathering of 75 people. Then came significant airplay (step forward Planet Rock and, erm, Richard Madeley). And gigs, lot’s of gigs. In the time between albums he’s played with *deep breath* GUN, Walter Trout, John Mayall, The Magpie Salute and Joanne Shaw Taylor. Oh, and a certain Black Stone Cherry – a huge influence on Barras.

And, he also found time to join Supersonic Blues Machine as their new vocalist/guitarist – which involved jamming nightly with a certain Mr. Billy Gibbons – Barras has certainly been to school!

Which brings us to 2019 and ‘Light It Up’, his new album. So, you ask curiously, how has this influenced Barras’ sound? What’s occurring with his new album? Well, in a nutshell, it’s not a million miles from ‘The Divine And Dirty’, in fact, it’s not many miles at all, it probably still has the same postcode. But it’s slicker, more polished and professional, and absolutely jammed to the rafters with hit singles.

Ever the ex-cage fighter, the albums first three tracks are snappy, efficient jabs – softening you up, locking in to their target. Nicely produced and full of big riffs, slide guitar and soulful backing vocals. The choruses are huge, the guitars are liquid mercury and the vocals are suitably Bon Jovi-esque. So far, so good.

And then it gets better, we barge our way into the title track with it’s fuzzed up dirty riff and oodles of Hammond organ, this needs to be a single! The Hammond stays on board for ‘6AM’, with added banjo for a subtle hint of Americana, Barras certainly knows his way around an earworm chorus.

‘Rain’ briefly drops the tempo for a ballad that ticks all the boxes while ‘Counterfeit People’, as well as being none-more relevant at the present time, is classy Tom Petty style American soft rock – sure to go down a storm live.

And then it’s back to business…the guitars are dialled back up for the return of the skyscraper choruses (have I mentioned Barras’ knack for a big chorus?). ‘Bullett’ has country rock swagger and ‘Wound Up’ would sit very comfortably on any classic Black Crowes album, it’s tambourine shakin’ feelgood rock ‘n roll charges by in a blur.

Cowbell and Southern funk join the mix while Barras’ guitar launches from it’s full-bodied backing into one breakneck solo after another. Final track ‘Pride Is Forever’ is a gentler companion piece to ‘Broken Teeth’…”pain is temporary, pride is forever”. And there you have it, off it fades, epically, into the distance.

So yes, a consolidation of Barras’ strengths and a considerable progression in terms of production, songwriting and craftsmanship. It is dynamic, committed and accomplished on every level. Any one of these tracks could and should be a radio hit. Sharing stages with his heroes has certainly honed his craft and you feel that the only way is up for Barras.

Released by Provogue Records on 13 September 2019 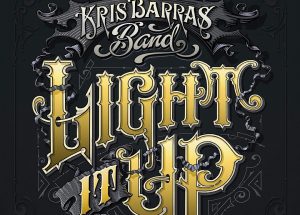