This evening at the Roundhouse, four metal giants come together for the final leg of the European Apocalypse tour. Four bands with different sounds, from different worlds, joined together. This is not an evening of ‘black metal’ or ‘thrash’ – but an evening of musical camaraderie from across the heavy metal sphere; bands and fans alike united in a festival-style line-up. You may have come for one band in particular, but you might be leaving with a new found love of another.

Bloodbath take to the stage slightly later than scheduled, but it is still to a half empty Roundhouse – even on a Sunday, a 6pm start proves a hard sell. The delayed entrance is due to technical difficulties, which continue to plague the beginning of their set. Nick Holmes, who has fronted the band since 2014 and appears in a dark suit with a dusting of dirt, is visibly irritated, muttering that this is ‘a great way to start’. He declares: ‘We are Bloodbath from Stockholm… well not me, I’m from Yorkshire’, with a hint of Northern twang. The acclaimed Swedish supergroup were for many years fronted by Opeth’s Mikael Akerfeldt and retains two members from the progressive doom band Katatonia. Old Nick, as he likes to portray himself with Bloodbath, has proved a worthy replacement, with the band recently releasing their fifth studio album The Arrow of Satan Is Drawn. It is an album of misery; themes of the enemy within and the self-destruction of humanity ring loud and true in this evening’s set. With band members daubed in blood and gore, apart from Holmes centrestage in his suit, Bloodbath are a fast, heavy death metal band with killer riffs and the bleakest of lyrical themes. 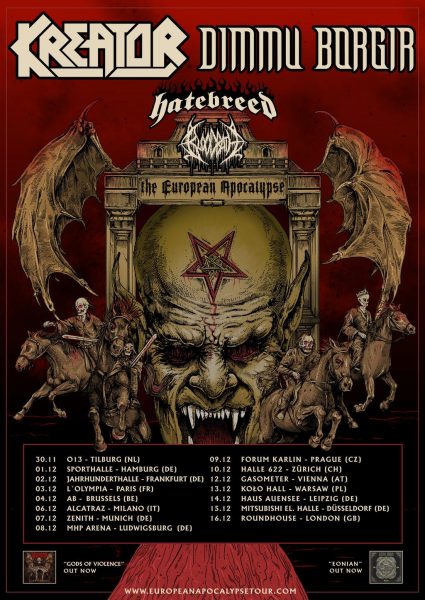 They are succeeded by the much more lively Hatebreed, with Jamey Jasta always one for hyping a crowd and having a bit of fun. There is a lot of running about, a lot of clapping, a lot of fist-pumping – it’s what he does so well. So many of Hatebreed’s songs are memorable – and with a frontman like Jasta you can’t help but singalong; ‘To the Threshold’, ‘Last Breath’, ‘I Will Be Heard’ – each song with short, chanting choruses. Jasta tells us that the Connecticut veterans will return to the UK next year as part of their 25th Anniversary Tour. He also offers a short anecdote about the band joining the European Apocalypse tour: “If Kreator ring you up and ask you to go on tour, you say ‘yes’. I mean, we grew up listening to those guys!” Jasta also mentions the significance of having such a varied line-up this evening – asking the crowd if they even knew Hatebreed, to which at least half probably did. He discusses the importance of musical comradery and the coming together of all aspects of the wider metal family. Jasta is a frontman who likes to really connect with a crowd; their whole set feels inclusive and open, and the irascible frontman he is committed to welcoming everyone into the Hatebreed party this evening.

As the lights dim for a short interlude and the stage starts to undergo a Dr Who style regeneration, there is little question as to which band is heading our way next. The drum kit itself is something to ogle; it’s like four in one and takes up a significant chunk of the stage – the drummer is no longer a mysterious entity in a cloud of smoke at the back, but the main dish in this visual feast of all things Satanic. Skulls are brought out by the barrowload, delivering an air of death and misery to even the smallest of crevices, whilst upside down crucifixes frame the front of the stage. Smoke begins to build up alongside a theatrical soundtrack of doom. Dimmu Borgir, the Norwegian black metal anti-gods storm the Roundhouse stage in an impressive, brutal assault. The light display borders on psychedelic; strobe meets alternate picking. The costumes are as equally magnificent; frontman Shagrath is dressed in a looming black velvet cloak with knee high boots, whilst guitarist Silenoz opts for a hooded leather jacket with a guitar-strap studded with ‘ALPHA’. They open with two tracks from their brand new album Eonian; ‘Interdimensional Summit’ in particular marking a clear shift to an even stronger emphasis on both the orchestral and the theatrical. This is grand enormous music that feels spiritual and witch-like. The riffs are defined, catchy and clean – this is a band that has moved on from a raw black metal sound. Eonian is nothing less than a series of thoughtful and complex compositions. The Norwegians are black metal magicians, formed in Oslo in 1993, since then their sound has evolved into a symphonic, ritualistic appreciation of all things dark and devilish. However, they end with a nod towards their earlier years with the masterpiece of misery that is ‘Mourning Palace’.

Tying up metal’s very own festive variety show at the Roundhouse this evening are Kreator, who have been blasting out their distinct brand of German thrash for over 35 years. Their set is atmospheric, high-energy and at times poignant. There is fire, confetti and an alien entity lurking in the corner of the stage. Crowd surfer follows crowd surfer as The Roundhouse is transformed into a sea of swimming bodies. There is a running slideshow that surfaces regularly, displaying photos of deceased rock stars among others. Kreator perform songs which have now become legendary metal anthems, ‘Phobia’ and ‘People of the Lie’ among them. ‘Satan is Real’, although only released in 2017, has already achieved a certain level of legendary status and one the fans always enjoy singing along to, reminding us that Kreator are still able to create memorable, riff heavy cuts. The Germans put the Tectonic seal on a truly memorable evening with the most-anticipated song of the night ‘Pleasure to Kill’ from their 1986 album of the same name. Safe to say, the crowd surfing exceeded expectations!