You may have noticed recently that Kreator’s Facebook page had featured a number of interesting titbits about their first four albums under the hashtags #kreatorfacts and #kreatorremastered. Why? Because BMG are releasing remastered versions of the albums from the Noise Records years on 9 June 2017 with bonus tracks aplenty as well as 28-page booklets included in each of them. With full lyrics and Mille Petrozza’s sleevenotes that tell of the band’s origins and development as well as the writing, recording, production and artwork of each of the albums, and the inspirations behind most of the songs, the packaging is magnificent. As for the music, where better to start than when they were known as Tormentor?

The last five tracks of the Endless Pain remaster are from Tormentor’s Blitzkrieg (1983) and End of the World (1984) demos, the remastering of which has made a significant improvement to the sound quality. “Satan!” comes the shriek that opens ‘Satan’s Day’ and on display in the not-as-muffled-as-on-the-original-demos are the seeds of the band’s identity for all to bear witness to in all their raw, blasphemous and more-than-occasionally off-key glory. For the kvltists amongst us, the five tracks from the two demos (sadly, the rather charming keyboard ‘Intro’ from the original has been omitted) will be a delight – or a disgrace for those that like their demos as rough as Beelzebub’s backside.

Eleven months after the release of End of the World demo and with a new moniker firmly in place – a sturdier-looking ‘K’ replacing the much softer ‘C’ – the band’s debut album Endless Pain greets the world. Having just six weeks to prepare material after being signed, Noise Records gave them two weeks to record and mix the three tracks carried over from the Tormentor demos and the seven new tracks. Recorded in six days and mixed in four, it could be said that the two weeks booked by the label were wasted on “producer” Horst Müller who, according to the sleevenotes, did little more than put the band in a room, tell them to play, and hit record. Having worked with Helloween, Celtic Frost and Running Wild, one would have thought that such experience would have been invaluable when working with such young and inexperienced musicians. But of course, had he given the band even the slightest bit of guidance during recording, Endless Pain wouldn’t be the primal, fierce and brutally honest document of Kreator in all their naïve and youthful exuberance.

Pleasure to Kill, to this day, is a killer album. Blast after hyperblast of riff after monster riff, it’s an unremitting and unforgiving piece of work that has had an undeniable impact on both the black and death metal scenes. The guitar tone, the riffs, the drumming, the vocal delivery, the shifting tempos and the sheer weight of each of the ten tracks is unrelenting unyielding in their individual and collective force. What the trio pack into the album’s merciless 38-minutes is insane.

Müller’s very much hands-off approach to production meant that the band’s sound had remained their own and would evolve organically. For producer Harris Johns, Müller’s apathy had been a boon because, unsullied by external interference, upon meeting the band, they would quickly establish a positive and productive relationship based on mutual respect and understanding. With two weeks again allotted for recording, Johns and band made the most of the time available to them and delivered an album that elevated Kreator to a new level and stands as one of the best German thrash albums of all time. In fact, it’s one of the best thrash albums of all time.

After Pleasure to Kill, Kreator’s next release was the Flag of Hate EP, blasting out the gates with the ferocious title track. First appearing on Endless Pain, this shorter, faster and heavier re-recording is a clear sign of the band’s confidence, experience and direction. Here, the band sound tighter and more sharply focussed, the vaguest sign of naivety or amateurishness having disappeared completely. With the more pronounced violent energy of Pleasure to Kill propelling the band forward, the three tracks are more refined, more concentrated, the band channelling their by-now more advanced musical and instrumental skills into longer and more complex tracks, ‘Awakening of the Gods’ at 7:32 being the longest they would produce until 2001’s Violent Revolution (‘Replicas of Life’ chimes in at 7:34 and remains the longest track to date). The only problem for a band that produces such excellent material such as this is where next?

1987: Terrible Certainty, including the Out of the Dark… Into the Light EP

Where does a band like Kreator go after an album like Pleasure To Kill? With expectations high, it was time to bring in another producer, Roy Rowland, who, despite working in an unfamiliar studio with equipment that he spent a considerable amount of time repairing, quickly established a good relationship with the band and get the best out of them in three week’s studio time. With Kreator now a quartet (new guitarist Jörg “Tritze” Trzebiatowski would only write and record the intro to ‘Behind the Mirror’) and all of the songs completed before they met Rowland, Terrible Certainty would see the band pushing themselves and exceeding expectations, their own included.

For this album, speed is matched by technical dexterity and menace as riff after riff weaves many a shadowy web for a bunch of concise and unpredictable tracks. ‘Blind Faith’ and ‘Storming With Menace’ are savage thrash attacks and act as clear indicators that Kreator were not about to be defeated by their own achievements displayed across Pleasure to Kill. It’s also clear that Kreator were not going to deliver PtK 2. Instead of going at it at a thousand miles per hour, Kreator took a step back and took a look at the songs and figured out what they could do with them without compromising their own artistic integrity by re-treading old ground. Though the production does let it down a little – the drums sound a little flat and the performance may feel a little staid here and there – with more complex arrangements in the intricately crafted songs, this is a more advanced beast. Very different to its predecessor, it may not be what fans wanted or expected but that’s what sets it apart.

As for the Out of the Dark… Into the Light EP, the one original track ‘Impossible To Cure’ is good and the cover of Raven’s ‘Lambs to the Slaughter’ is okay. And while the six live tracks capture the energy of Kreator on stage, this EP did little more than fill the gap while the world waited for Extreme Aggression…

Kreator close the 80s on a high with Extreme Aggression. Over the course of their first three albums (and interim EPs), Kreator had established their sound, their confidence had grown significantly and their song writing had been honed to a sharp point and here, Kreator go for the throat with aplomb. A more streamlined assault, what dulls the serrated edge a little is the production. But though a little mechanical in feel, it’s still a harsh, abrasive and – yes – extremely aggressive slab of nuanced and hard-hitting thrash.

Cutting through with plenty of hooks, plenty of sharp twists and turns in the time signatures and tempos, and plenty of penetrating riffs, the band burn brightly, brutally and intensely with an immediacy and intensity that, from the opening title track to the ferocious closer ‘Fatal Energy’, never once abates. The guitar has plenty of knuckle-dusted punch, the lead breaks are both maniacal and curiously melodic, their distorted contours sharpening up the already abrasive songs. One welcome aspect of the production is that the bass can be heard and so the tracks have a little extra weight than on previous records. While perhaps not as successful – or welcomed – as Terrible Certainty or 1990’s Coma of Souls, this is still a great record and, along with a second CD featuring a live performance from 1990 in East Berlin, completes this quartet of thrash classics superbly.

End of the World Demo

Out Of The Dark…Into The Light EP 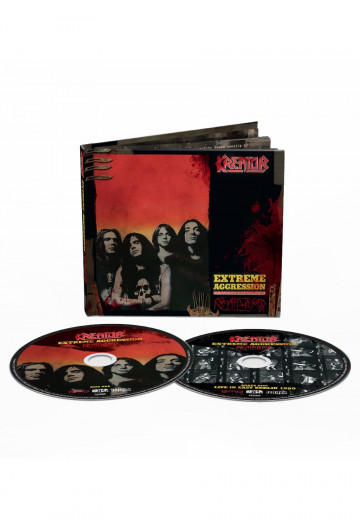