The KMFDM Industrial Rock caravan swept through a dozen US cities last year to promote Hell Yeah, the band’s 20th studio recording. Seven of the twelve visceral thrills on Live In The USSA come from that album.

And it’s live that we get the full gut-punching impact of the band’s music, a unique marriage of performance art rock to the hurtling momentum of industrial metal.

For several years now founder/writer/producer/vocalist Sascha Konietsko and vocalist Lucia Ciffarelli have been the twin mainstays, artists who invest so much in each live performance the band would be unrecognisable without them.

The face slapping opener, ‘Freak Flag’ gets the album off to a recognizably heavy start, cuing a run of tightly structured songs packed with electrifying dynamic shifts, clanging, torqued up guitars and brutally rhythmic electronica.

It wasn’t always thus. It took years of experimentation and refinement before Konietski’s fiercely political lyrics found a delivery system without equal. A calculated psychological soundscape in which songs like ‘Hell Yeah’, ‘Rebels In Control’ and ‘Total State machine’ become paeans to freedom, heavy with metaphors, railing against war and oppression. Songs that need an audience.

The full burn ferocity of ‘Burning Brain’ and ‘Shock’, driven by a loud and relentless rhythmic pulse, seems a shade less focused in the live setting, but it’s a moot point – KMFDM’s field of fire tends to encompass anyone who wanders into their line of sight.

With the last two tracks they reach back through the years and resurrect ‘WWIII’ from 15 years ago, and ‘Godlike’ from the last century. Two blistering metal/industrial combos that strike as unmercifully as any of KMFDM’s later work.

At times it’s a sledgehammer of a live performance, but one that reinforces the notion that Konietsko has always been wise to the value of hypnotically repetitive musical motifs and high calibre, pop quality tunes. Look no further than ‘Virus’ and ‘Murder In My Heart. It’s a sleight of hand he has skilfully employed time and time again, to great success. Live In USSA is no different. 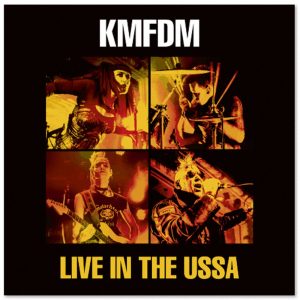