Kira Mac are delighted to announce the release date for their eagerly awaited 10-track, self-released debut studio album. So far, three singles have been released and are out now: ‘One Way Ticket’, ‘Dead Man Walking’ and ‘Hit Me Again’ — all have landed on the prestigious A-Playlist on Planet Rock. The full album, 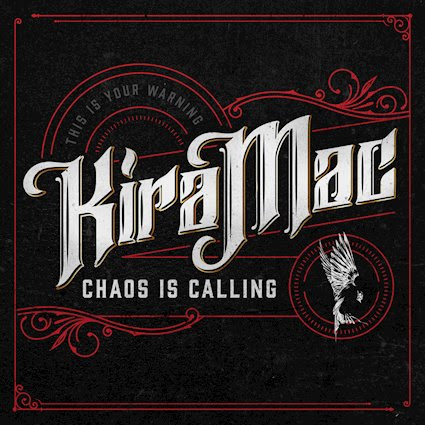 ‘Chaos is Calling’, will be released this Autumn on Friday 18th November. What’s more, the CD is now available for pre-order over — by itself and in various bundles — at the band’s brand-spanking-new online store (link below)! ‘Chaos is Calling’ will also be released on vinyl on 2nd June, 2023.

Planet Rock described Kira Mac as “rock n roll livewires” and made their debut single ‘One Way Ticket’ Track of the Week within just two weeks of release. The single then leapt to the Planet Rock A-playlist, went on to top the 28-day April Playlist, and received rave reviews and feedback.

“To get Track of the Week was one thing,” guitarist Joe Worrall told Devil’s Gate Music, “but to then be added to the playlist alongside some of the best bands of the past 30 years was just unbelievable. Don’t think that we have still quite wrapped our heads round it yet, ha ha! I wrote that demo to ‘One Way Ticket’ in my Mum and Dad’s house: to think it’s getting played on Planet Rock to hundreds of thousands of people is, yeah, mind-blowing!”

Taking their name from their powerhouse frontwoman, Kira Mac is a band whose foundations lie solidly based on straight-up old-school blues rock riffs. To these, they’ve added modern edge, a tonne of fresh flair, soul and intense double shots of rock ‘n’ roll. Using twinned powerhouse vocals plus a killer guitar lead, they form a force to be reckoned with.

Kira Mac’s raw talent and accomplished tone is built from grassroots and the love of eclectic sounds and acoustic skills. As a collective, and hive mind, they’ve absorbed influences from great bands and artists that came before them, being raised in particular on old school rock, blues, and everything else in-between.

Kira Mac (a.k.a. Rhiannon Hill) herself is an established writer and vocalist, who went on to partner with guitarist Joe Worrall. This has evolved into the band today, powered by the driving force of original songwriting and the unique sounds and stylings that the band produces, with Alex Novakovic (Electric Guitar); Bret Barnes (Bass), Cal Casey (Drums) in the album line-up. Max Rhead has taken over drum duties in the current line-up.

“[Kira] gives Lzzy Hale a good run for her money,” said Gareth Griffiths, for Rockfiend, “whilst Joe, Alex, Bret and Cal successfully create the muscular, riffing sound of modern rockers, such as Black Stone Cherry and Shinedown whilst remaining faithful to a foundation of blues”.

Their full studio debut album ‘Chaos is Calling’ is due for release in Autumn 2022, on Friday 18th November.
“It’s been in the making from 2015 when Joe and I met,” Kira reflects “It’s been a really long time coming (and we’ve had such an incredible time writing and making it on its little journey) that we hope everyone loves listening as much as we loved making it! I think this album has a song for everyone, whether you like rock or blues music or not — and above everything else, it’s us, and it’s honest.”

“The first two singles definitely set the tone for the album: we were going for an ‘all killer, no filler’ vibe, so we deliberately picked the most party ones, but there’s a few on there to level out the dynamic.”

What’s more, as the band say, “With a brand-new album coming out in the Autumn of 2022, it makes sense to promote it with 11 dates through England, Wales and Scotland (Ireland we’re comin’ atcha soon!)”

Tickets are on sale now. To find out where Kira Mac will be playing, or to follow their updates and releases, follow on their website and social media platforms (see below).
In the meantime, make sure to check out Kira Mac’s singles on all digital platforms and check out the band’s brand-new online store to pre-order ‘Chaos is Calling’.
https://officialmerchandise.store/collections/kira-mac

N.B. The band advise – if ordering the vinyl, make sure to place that as a separate order from the CD or/and t-shirt as the store does not part ship orders. The CD is out on 18th November 2022: the vinyl is scheduled for release on 2nd June, 2023.