Paul Castles enters the Kingdom of the Polish underground warriors to check out their latest album, released via Godv ov War Productions on March 12, 2018

Such is the remorseless flow of bile-bubbling black metal emanating from the nooks and crannies of deepest Poland that attempting to catch them all is akin to collecting raindrops with a milk bottle. You’ll get a few but plenty will pass you by. Kingdom’s Putrescent Remains of the Dead Ground was released via Godz ov War a few months ago but is not an album you want to let slip through your fingers.

It’s the fourth full length release from the Polish extremists and serves up another crucifix crushing selection of barbed black metal, maintaining the onslaught from previous release Sepulchral Psalms From The Abyss Of Torment (2016). As if to assert their black metal heritage, Kingdom have also thrown an Immortal cover into the bubbling cauldron, one that spits with venom and nihilistic intent from the brilliantly assembled intro to opener ‘Walls of Askalon’, complete with graveyard growls and siren death call. You immediately have that feeling that you’re among the undead and the great unwashed. The tempo is ear-ripping while the mood is dark and infused with subterranean undercurrents. With decay almost dripping from the riff shafts the drumming is feral and spares nothing. 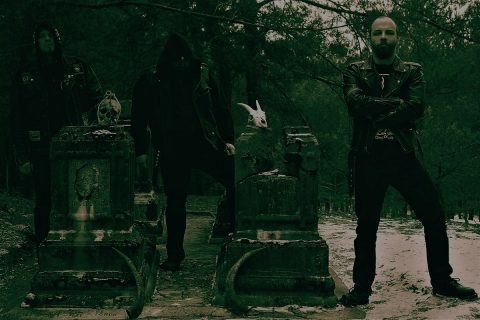 ‘Putrescent Remains’ is a steadier beast altogether, more controlled, as Kingdom delve deeper into their psyche, although towards the end they just can’t resist igniting a few firestorms. ‘Grobowiec Ludzkości’ oozes evil intent with a rapacious hook at its core, rattling along almost as if Lucifer himself is at the wheel. The fourth track ‘Niemy Krzyk Zagłady’ is an instrumental but rather than being seen as a filler it actually adds another level of doom encrusted deviancy as the pace slows to something approaching a menacing stomp.

‘Black Light to the Rotten Wombs of Disgrace’ picks the bleeding baton up as Kingdom suddenly start to go through the gears with more urgency, even finding time to inject a solo before the whole thing explodes under its own steam. Something resembling projectile vomiting opens up another sonic sickbag in ‘Martwa Ziemia’ although it does settle down into an assured rhythm, albeit one laced with larynx shredding cries and some elbow snapping drum attacks. The rapid fire returns on the frenzied ‘Karma Slayer’ before Kingdom sign off by paying worthy homage to Norwegian legends Immortal with an all or nothing interpretation of ‘Blashyrkh’.

For those who walk through the corridors of darkness, Kingdom will shed just enough light to help you navigate your path.