Guitar cranked up Steve Hill walks stage front and delivers ‘Rhythm Now’ aptly demonstrating and amusing us at the same time with his unique one-man band technique whereby his feet hit bass drum and hi-hat while a drum stick attached to his guitar head hits cymbals too. Novelty aside it does the trick. Swapping heavy rock for a slower boogie grind he follows it with ‘Go On’ then pours on the feedback to deliver the blues with some fine rugged vocals on ‘Damned’ with a slow deep and mean solo thrown in for good measure that speeds up and heads out into Johnny Winter territory before finishing with some flashy country picking.

The crowd applaud healthily throughout; the gimmicks are fine but they enjoy the music too. It ain’t nothing new, but it’s done well and with gusto. Like the Canadian himself, decked in denim and t-shirt it feels down to earth and connects in all the right ways. ‘Let Me Change Your Mind’ comes across as much a confessionary number as it does one intended to persuade, while ‘Sweet Honeybee’ is both cheeky and jolly. Then, chugging down on his guitar he thanks us for the warm reception received and roars into Youtube hit ‘Dangerous’ – And as with his new live album, In Concert, he segues into Hendrix’s ‘Voodoo Child’ with extended howling solo and blasts out the main riff to ‘Whole Lotta Love’ before heading back into the main song before leaping off the stage to go sign records and watch King King along with the rest of the audience.

Hill has put the audience in a good mode, and following some prompt bar service we resume our positions as as AC/DC’s ‘Highway To Hell’ plays over Pa. It’s hot and sticky in here tonight and we’re looking for some rock and roll, so when Alan Nimmo cries out “Are you ready?” we answer in the affirmative.

A slow inverted musical introduction has us momentarily guessing until the heavy hook of ‘(She Don’t) Give Me Good Loving’ grips the crowd. They slip straight into the smooth blues soul of ‘Waking Up’, the audience moving to the beat and singing along – and while the Black Country and West Midlands accents are delivered with conviction music listeners are thankful for the sweeter harmonies coming off stage from drummer Wayne Proctor and keyboard player Jonny Dyke, despite which it has to be said it’s the rolling groove of Lindsay Coulson’s bass that makes this song.

“We always dedicate this next one to my brother Stevie” announces Nimmo, of ‘You Stopped the Rain’ but he informs us it’s also for a lad called Matthew, who’s been driving his parents crazy watching King King videos and got them to bring him along tonight. And so, the number commences, the crowd “whoah-whoahing” away from the outset, the pace a little faster than normal it allows Nimmo’s solo to bubble and bounce melodically as he works his way up and down its neck. A guitar changes ensues for the Bad Company style blue collar rock of Exile & Grace’s ‘Broken’ featuring some terrific heavy drumming the tone of which again allows Nimmo to wail away on guitar, while also hitting the higher register vocally. 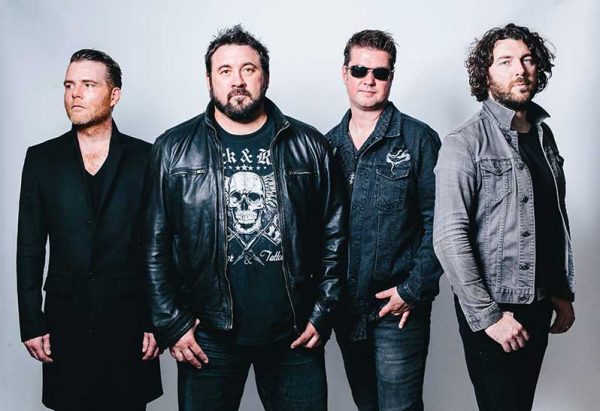 As Nimmo introduces Dyke whose warm organ swirls carry us into a ‘Long History Of Love’ I begin to reminisce I’ve seen King King a fair few times the last couple of years but tonight I’m surrounded by friends with more of them across the way, and it really feel good to share such a joyous occasion with them. What’s more, after facing a few throat problems and having to delay tours it’s obvious Nimmo is in more than good shape. He delivers a truly great vocal rendition on this song tonight, and is emotive and powerfully voice through the course of the night. Dyke’s ensuing organ solo is inventive and evocative, Nimmo wrangling notes out of his guitar alongside him.

I’d declare the song to be tonight’s highlight except the band is really on form tonight and they’re punching above their weight with every tune. Dyke has fit in snugly now and they’re comfortable adding slight rearrangements to familiar numbers that add further finesse. The keyboard played swaps to electric piano as they stomp and strut through ‘Lose Control’ and then things in the real world appear take precedence: The sound engineer’s heard over the PA, we turn our heads and a police officer young enough to be half the audience’s son reads out three car registrations, one of which sadly belongs to a couple of friends. King King will ironically play ‘Rush Hour’ before those friends return relating only minor damage and nothing stole, and while it makes you wish the old Bilston Police Station was still over the road, we can be thankful they prevented things being worse.
Bringing us back to the reason we’re here Proctor takes a turn around his drum kit and we clap along as the Stones meets Free chord opening of ‘Long Time Running’ breaks out. Proctor keeping the momentum going while Dyke funks up on clavinet, and once more we get into the swing of things. Following band introductions ‘All Your Life’ comes next, with Nimmo and Dyke trading licks. Affixing a Gibson for ‘Don’t Be A Stranger To Love’ the band as a whole dig deep, keyboards eerily referencing John Paul Jones on Zep’s ‘No Quarter as much as Rabbit Bundrick’s on Free’s ‘Heartbreaker’ evoking the feeling of being alone and afraid, save the crowd singing along proves otherwise and Nimmo’s vocals inspire us to take heart. The arrangement feels tweaked but we hold tight with it, clapping as the main melody gets ever faster, Nimmo’s guitar screaming out until its sighs and softly puts the whole thing to bed.

Returning for the singular encore of the party rocking ’Let Your Love Shine In’ Nimmo sings as heartily as with the set’s opening number, sauntering around the stage kilt swaying as he plays guitar, smiles on everyone’s face and then, sadly, that’s it.

When next they commit to making a record there are going to be some hard choices made about which songs to drop live, but that’s a problem for another day. Right now the world is simply a better place for having King King in it.