Her band striking up the opening chords, Sari Schorr walks on and places herself centre stage, sending out an invitation for the weekend to begin as she sings ‘Welcome to the New
Revolution’. Dressed all in black, her long-jet hair waving wildly one minute, covering her face the next, there’s a lot of body language to take in right from the get-go. It’s like Kate
Bush’s theatrical movements got waylaid making a deal at the crossroads and she’s making moves like a Jagger one minute, legs astride with the confident charisma of Paul Rogers the
next, but she’s all woman let’s make no mistake. The crowd respond well but the band delve straight into the next number, a slow lingering heavy blues full of anguish, even as the applause reaches out to greet them. Next up, ‘Ready For Love is performed as a raging torch rock ballad, Ash Wilson’s power chords relenting only for an understated piano solo.

That ‘King of Rock And Roll’ is about Robert Johnson may sound a little contrary, but it’s the music we hear that counts. This is swampy gumbo blues rock, getting heavier and faster
becoming power rock gospel as her voice soars and sighs away, falling down to her knees James Brown style one minute, jiving across the stage the next. Next song in she’s purring
into her mic asking “Why don’t you believe?”But I think this audience does. Many will not have heard her before and they’re already won over. The title track off her latest album, Ian McLagan’s ‘Never Say Never’ finds here in emotionally bruised whisky sour reminiscing before hitting high piercing crescendo. She tells us ‘Maybe I’m Fooling’ is on Planet Rock’s playlist and it’s a strong number to end on what feels far too short a set. Having seen the band play last year, they’re an ever more accomplished act now, and Wilson’s guitar here is raw over a heavy driving funk beat, with backing vocals chiming out like a mantra as the front woman hollers joyously over it all for all she’s worth. Get your tickets early next time she’s out on a solo tour. 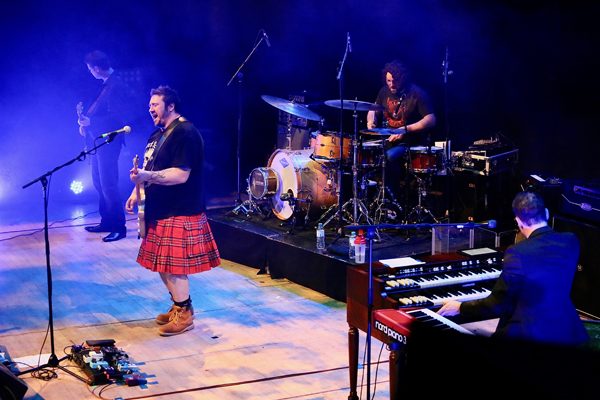 A quick dip to the bar before AC/DC comes over the PA and my beloved’s memory dips back in time to being treated well by Bon Scott and Angus Young when they played here and she was but a wee girl, but we digress… Positions are taken, kilts are flowing and King King is on stage. “Welcome to our 10th anniversary tour and thank you for coming out tonight!” calls out frontman/guitarist, followed by the familiar, “Are you ready?” And we’re straight into ‘Broken’. For a song relating ecological and political despair there’s a lot of people bopping merrily and singing along. Tonight no one’s allowed to sit in their comfy seats. Nimmo’s singing out at the higher end of his range, power chording through underneath before delivering a frothy solo of six string delight. That stated, tonight it’s drummer Wayne Proctor’s whose sound you can’t ignore, the clarity of his playing precise and powerful, and it’s him who opens and closes the upbeat driving rock of ‘Lose Control’, with piano syncopating and adding colour while Nimmo moves to the edge of the stage to solo. 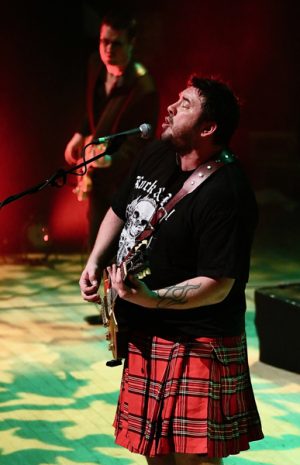 Jonny Dyke’s keyboards introduce an early set rendition of ‘Rush Hour’, the crowd whoah-woahing away before Nimmo himself has chance to reach the microphone to issue his own deep throaty deep sighs. The momentum builds, Nimmo’s guitar wailing with the sustain of Kossoff as he inlays notes before a chunky chopping chord grind with a great snare drum attack pushes them along through a series of emotional musical phases. The band’s harmony vocals work well but the audience take over again – So strongly in fact it’s like we’re all back down New Street at the Odeon singing along with the original Whitesnake like we did in our youth. Nimmo jokes between songs, notes the wintry weather, explaining how it took them 15 minutes to get to the concert even though they were staying in the city! Exile & Grace’s ‘Heed The Warning’ is aired live for the first time, and it becomes apparent with tonight’s set list is going to be a little different, for all manner of reasons. A vibrant tumbling rock tune wherein Dyke injects Stevie Wonder style funk chops and bass player Lindsay Coulson deftly applies octave changes.

“We’re going to dedicate this to Mrs Coulson, Lindsey’s mother who is here tonight,” announces the singer. Diagonally to my right a row in front actually. “My second mother” he exclaims, telling us how she looked after them when they started out, and will continue to mention her fondly during the night, telling us she’ll slap the back of his bare legs if he doesn’t behave. For those unaware co-founding member Lindsay recently announced he would be leaving the band after this tour. Thus, ‘Coming Home (Rest Your Eyes)’ is an apt number. Soul-pulsing blues with organ whistling gently away, couple link together dancing – A number any mainstream pop act would commit murder to have in their auto-tuned repertoire.

“We’re going to play this simply because we love to” says Nimmo strapping on his Gold Top Les Paul for ‘Stranger To Love’. The rhythm section ensure the song’s groove, Nimmo smoulders on vocals and offers a more lyrical, questing blues drenched long solo than normal for the song, getting rockier as he moves stage front wailing out emotively. There a big rotund bottom end to Coulson’s bass for a joyful rendition of ‘Waking Up’ and his right hands gets ever speedier as they launch into the Bad Company/Thunder style rock of ‘(She Don’t) Gimme me No Loving’. More moody melodrama ensues with the broken chorded introduction to ‘Take A Look’, its slow soulful blues rock building in tension as the rhythm section set the beat, keyboards and guitar meshing as it reaches an evocative conclusion. Back to the rock arena, ‘Crazy’ swells over with guitar and a pumping gritty bass, trundling and trucking away with a funky clavinet solo for good measure. Someone in the audience is making a live Facebook recording on Nimmo’s behalf for his own mother. They’re about to play ‘You Stopped the Rain’ traditionally dedicated to his older brother Stevie, who overcame cancer. He relates his mother had also done so, so he’s playing it for her tonight too. “She put a Peter Green record on, nudged me, and said listen to this,” he recalls of a life-changing moment that King King’s fans can be thankful for. He opens singing a cappella and it’s a bold if not gorgeously ballsy version, the song’s guitar solo biting through like a redemptive force to reinforce the lyrical narrative. 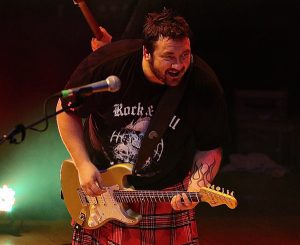 “She floats around like she’s on a cloud, she’s like that backstage too!” smiles the singer, asking the audience to give it up for Sari Schorr. More seriously he exasperates, “Dads and
their daughters, we love them but…” and the band play ‘Find Your Way Home’. Nimmo’s voice deeper, crooning over this gospel power rock, harmonies chiming in; the organ plays a haunting melody yet counter-intuitively somehow makes you feel safe. And with that they leave the stage.

When King King play Birmingham Town Hall they tend to make their encores a party, as likely as not inviting guests up on stage. Tonight it’s local lass Jackie Williams who sang backing on their debut album. I instantly recognise the lady who’s been standing to my right all evening, now I get to hear her sing harmonies, add soul-soaring lines, wailing and whooping away in between to the grunting funky wah-wah rock of ‘Take My Hand’ all done without rehearsal according to Nimmo afterwards. This leaves us with one final number, and a heartfelt speech: “My right hand man is moving on. We wish him well on his next venture and dedicate this song to him.” ‘Old Love’ is delivered as melodic, deep crushing emotional blues, vocals warm with soul, and long solos that extenuate what words cannot express. Nimmo moves across to Coulson, face to face, guitar stirring forth, bass ever perfect in succinct placement as keyboards slide gracefully through and drums steer the musical wave of emotion and one final chorus. “We’ll see you next time!” are the parting words and Lindsay Coulson raises his Fender aloft to his crowd for one final night in Birmingham, leaving us all wondering where the future lies for this band that right now are at the top of their game.