Not a single weak track…

King King have been doing the rounds for a while, and this new album is now their fourth album in seven years.  Their last studio album Reaching The Light was the one that really started to get them noticed, and their stylish blues-rock won big at the British Blues Awards – no less than five awards for the quartet from Glasgow.

This time around, though, there’s a different edge to the blues-rock on offer. We’ve still got the soulful vocal and slick guitar work of frontman Alan Nimmo, and the award-winning bass of Lindsay Coulson is still as good as ever. The difference is muscle: the new album’s production gives both of these elements so much more heft, and even brings the keys of Bob Fridzema into more prominence, and then underpins it all with thumping drums from Wayne Proctor. It’s clearly a switch in style to something lush, thick, warm, and inviting, but the elements that made King King so popular are still there in spades.

This new sound is somewhere between Thunder and Whitesnake – muscular, powerful and with big sing-along choruses. We get soulful ballads like ‘Find Your Way Home’ being followed up with big stompy riffs and glorious fretwork in ‘Tear It All Up’.  It’s a slightly more rocky sound than their previous blues, but the guitar work exhibits a lot more restraint giving the songs that little bit more room to breathe.

For me, this approach really elevates the album above King King’s previous albums by a long shot. I honestly can’t say enough good things about this – the way they’ve combined rootsy blues with classic rock anthemic sensibilities is brilliant. Their influences are worn very firmly on their sleeves, and when filtered through the obvious talent in the band the album really steps up to the plate and delivers a step up at the perfect time for the band.

Personal favourites are the opener ‘(She Don’t) Gimme No Lovin’’ and ‘Long Time Running’ which exemplify what the band are capable of – catchy and fun blues-rock with lovely guitar licks and hooks like you wouldn’t believe. That said, it’s hard to pick out favourites, because there’s not a single weak track on the album.

Do yourselves a favour and check out the album – and if you can, go see them live on their rescheduled tour early next year. 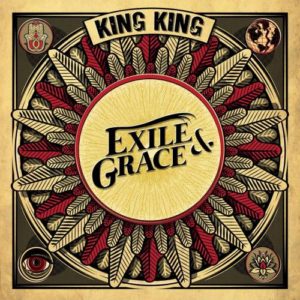