It has been some two years since Robert Fripp declared via his online diary that “The Seven-Headed Beast of Crim is in Go! Mode”, an announcement that ushered in the eighth incarnation of King Crimson. And after North American shows in 2014 they have returned to European shores for a run that encompasses a significant number of UK dates – bucking the trend given they had not performed outside of London since 1982. Indeed you have to wind the Crimson gig clock back to September 1973 to recall when they were last here in Birmingham with a show at the old Town Hall.

Much has been made of the three drummer set up and the stage configuration is flipped (or should that be Fripped) with the three gargantuan kits making up the front line and the back line on a raised platform that is occupied by an assortment of guitars, sticks and woodwind. Aside from Fripp the current incarnation of Crimson features assorted alumni by way of guitarist and vocalist Jakko Jakszyk, bassist Tony Levin, returning sax veteran Mel Collins and the drum trio of Pat Mastelotto, Gavin Harrison and Bill Rieflin. After a pre-recorded plea from the band for the show to be enjoyed without the unnecessary use of mobile phones and other recording equipment (impeccably observed from where I sat) they appear – suited and booted – to a warm show of appreciation. 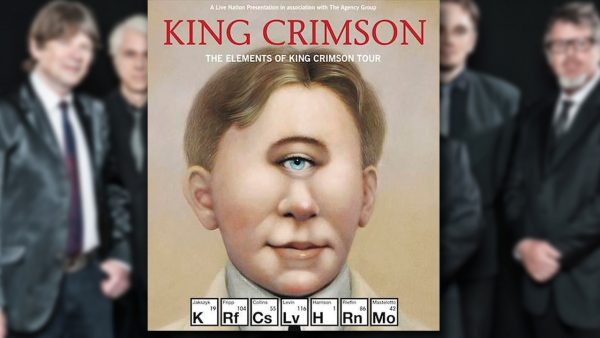 There is a wonderful anecdote in the tour box where having led the band through a rehearsal of ‘Larks Tongue In Aspic: Part II’ Fripp states that “we do know our proper parts – if we wanted to play them”. And indeed whilst the material may be drawn primarily from the early era of 1969 -74 this is no nostalgia trip – everything heard from the stage proving to be very much a contemporary interpretation and there are seemingly no limits or boundaries. Encased in headphones and sat at his stool throughout there are knowing looks and nods from the veteran guitarist in the direction of his bandmates and you get the distinct impression that Fripp is actually enjoying himself. The audience are, naturally, unflinchingly attentive throughout the two hour performance and rightly so… King Crimson on a Birmingham stage in 2015, many would never have dared to dream it possible.

To single out individual performances does a disservice to the experience as a whole but when Jakko Jakszyk is called upon to sing he does a superb job on ‘Epitaph’ and ‘Easy Money’ and Mel Collins sax contributions are truly outstanding. There is very little movement on stage, no words are spoken and the production is minimal but when Symphony Hall is gradually transformed into a red glow during ‘Starless’ the overall effect is mesmerising. And whilst the thought of three drummers may have some envisaging numerous solos there is really only one (by Harrison) during the closing ‘21st Century Schizoid Man’. It is preceded in the encore by ‘The Court Of The Crimson King’, resurrected after some forty-odd years and sounding even more majestic, bombastic and terrific as it ever was. And so with a few waves, bows and nods they are gone. Will they ever return to hold court again? We can but hope.