Released by OSH Records and reviewed by Woody

Independent British rockers Kinesis 4 are led by principal songwriter Opkar Hans. Their new album Dreams of Rainbows has a lot of influences and styles on show including classic rock and prog. The most overwhelming and obvious flavour of the album though is Psychedelic rock and as the album has a real throwback tone to it the most obvious comparison to me is The Doors. The album has a whole really harks back to that ‘hippy’ rock style of the late sixties and early seventies.

There are a lot of Prog style song structures and instrumental flows to the songs but it is always very trippy and psychedelic. There are quite a few different uncommon musical instruments thrown into the mix which add a really multi-cultural feel to many of the songs. One of the most noticeable songs to do this is ‘T-Shirt’ which has a strong Caribbean vibe to it which is accentuated even more so by the use of steel drums.

Hans’s song writing compositions have a strong whimsical and ethereal tone to them, it’s very mellow and laid back – all very peace and love inducing. I can appreciate Dreams of Rainbows for what it is but it never really gets under my skin as it doesn’t really appeal to my own personal music tastes. Looking at it from an objective outside stand point though I can definitely see it appealing greatly to fans of retro rock especially those who like their psychedelic rock and desire something to easily chill out with and be taken somewhere else to.

The aforementioned ‘T-Shirt’ is one of the stand out tracks with its upbeat and funky flow. It’s a very happy go lucky song which incorporates steel drums and a horn section as well as some very enjoyable melodic vocal harmonies. There are a couple of instrumentals which book end the album ‘Rock U Stupid’ which is very trippy prog and ‘Summer Morning’ which is very chilled and evocative. ‘The Train’ is probably the hardest rocking track with its driving riff and Hammond organ which sees Hans showcase his classic rock song writing.

As a whole though the ethereal and trippy tracks like ‘Taking Our Time’, ‘Springtime’ and ‘I Believe’ are the most indicative of Hans’s song writing style and the overall sound of the album. For an independent release, the production is pretty good too, modern computer tools make it far easier for indie bands to make professional sounding albums but you’ll still be surprised how crappy some are still done. Hans might not be the strongest or powerful vocalist but his voice suits the tone of his songs and accentuates the ‘far out man’ attitude of most of his compositions.

If you like your retro rock and like your prog on the extra trippy side of the moon then Kinesis 4 are definitely worth your time checking out. 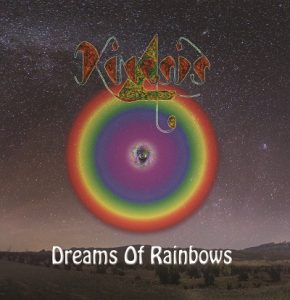