In case anyone doubted the Scandi black metal battalions’ ability to conjure up something new then Khaospath have shown that the bottom of the hellish pit has not yet been reached. This impressive album follows on from debut release Synagoga Obscura which set them on their not so very merry way in 2014. For The Devil Speaks The Truth is a commanding  follow-up that fits into the traditional twisted and tortured terrain anyone familiar with the likes of Watain and Marduk will feel right at home with.

The opening attack sounds as though the arse cheeks of hell are erupting, with snarled vocals fighting for supremacy against a razored riff attack. A more recognisable melody gradually works its way through the demonic debris of ‘Verbis Diaboli’ as Khaospath begin to assert their sonic skills, and very impressive they are too. Superbly named vocalist Hellcommander Vargblod has the sinewy strained style of the dark lords although towards the end of the opener he briefly switches to a beefy baritone to seal the track with a gothic flourish. The beats are restless and rabid, courtesy of Gheist with the third band member Döden supplying a seamless line of weighty basslines.

‘Under a Bloodstained Nightsky’ sees Khaospath turning down the heat as the tempo is steadied while still maintaining that primal atmosphere with that sense of evil flowing through the speakers. The riffs almost tumble into freefall as if falling over the precipice, as Vargblod maintains the satanic cries with lines such as “Her newborn child, she’d crush its head, Whilst suckling her bosom until it’s dead.”

A monastic choral chant leads into ‘The Stench of Betrayal’ which is every bit as stifling as its title suggests, Gheist lording it over the skins with impressive blink-and-you’ll-miss-it speed while Vargblod conjures up a near tornado with his soaring riff while leading us towards more hellish flames. While largely sticking to the frostbitten script, the latter stages of ‘Oraculum Strigol’ feature a brief folky sequence although this diversion is almost over before you quite cotton on as to what’s happening.

‘Lunacy Triumphant in Walking Sleep’ is another headspinning battery charge but Khaospath bring the curtain down in quite remarkable fashion when Vargblod shows a different side by superbly cleanly singing the epic closer, ‘The Raven’s Downfall’. It shows that Khaospath are from being one-trick black metal ponies. Indeed it merely heightens expectation and interest in what they may offer in the future. But while the final number shows a surprisingly deft touch, there’s no shielding from their overall blinding black metal sorcery.

Khaospath have much to offer and For the Devil Speaks the Truth is a substantive and rewarding release in which the heat from Satan’s flames threatens to singe your eyebrows. 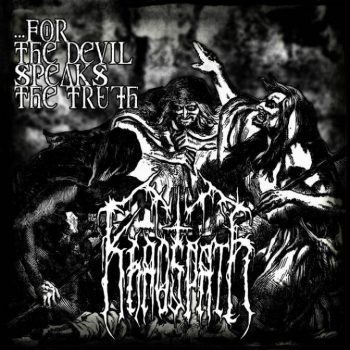