Five years down the line from their last release Norwegian trio Keep of Kalessin return with new album Epistemology, which roughly translates as the study of knowledge. That’s the title explained but of much more importance is what this release is actually like. Well, pretty darn good is the answer. Keep of Kalessin are not on the surface the most accessible of bands although this release embraces different strokes and subtleties that makes it more inviting than you might initially expect. The last album Reptilian saw the band operating as a quartet but the departure of singer Thebon just over a year ago prompted a necessary change of direction. Rather than simply look elsewhere for a new vocalist the remaining trio turned inwards and the band’s founding father Obsidian C promptly stepped up to the mic, without relinquishing any of his guitar responsibilities.

The opening intro sounds as though it was recorded during choirboy’s practice at Westminster Abbey. One that brief hurdle is skipped we pile straightinto the real opener ‘The Spiritual Relief’ which proves to be something of a revelation. This combustious cocktail of orchestral sorcery ebbs and flows with sparkling vitality and vision as somewhere in the middle drummer Vyl gradually loses himself in a flurry of pounding blastbeats. It’s a song that stretches towards 10 minutes but it needs that length to reach its many tangents and trajectories. As opening numbers go, ‘The Spiritual Relief’ is truly epic with a holistic ambience to complement its title.

The tempo throughout Epistemology is relentlessly fast, such as on ‘Dark Divinity’ but there are plenty of melodic moments interwoven alongside some of the more abrasive assaults. There are some fearsome riffs here thrown into the pot and the big sound gives the album a real Euro flavour. That’s no criticism, even allowing for the band’s questionable judgement a few years ago when they threatened to carry the Norwegian flag in the Eurovision Song Contest! Fortunately that never came to pass. Indeed, when KoK first emerged blinking through the forests of Norway they were conveniently categorized as another bunch of Norse black metal warriors. No longer. They were never really part of the corpsepaint class anyway and this release, the band’s sixth, puts even more distance between them and some of their more visually striking countrymen such as Dimmu Borgir.

Technically Epistemolgy is terrific and Obsidian C has ample opportunity to show off his talents with a number of stunning solo sequences such as on the pulsating ‘Necropolis’ which gradually winds up the tension before emerging as one of the standout tracks, furious riff action, searing chorus amplified by a brilliant blend of clean harmonies and death metal style vocals. Bassist Wizziac is every bit as vital to the KoK sound while his backing vocals are also an important ingredient in making Epistemolgy such an appealing album.

It closes with the dazzling title track, another epic at around 10 minutes in length. With a chorus that could light up a cathedral, Keep of Kalessin can rarely have sounded as confident and assured as this. At one point the tempo almost threatens comes to a halt entirely before a solo kicks in to slowly send this mesmerizing song into a spiraling guitar frenzy.

Keep of Kalessin offer something different from the familiar shapes that make up old school Norwegian black metal. The Trondheim trio’s arsenal of raging riffs and atmospheric melodies have been sumptuously coupled to execute an album with more polish than a squaddie’s boots at parade inspection. 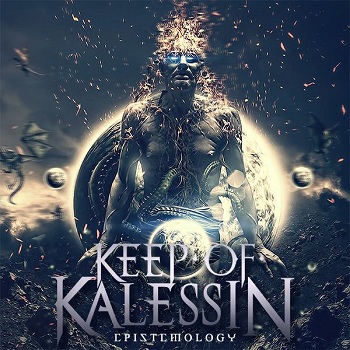