‘Before The Dawn’, a sold out 22-night residency at London’s Hammersmith Apollo, represents Kate Bush’s first live concerts in 35 years.  Amidst the media furore that surrounded her return to the stage, Kate broke a new record with eight of her albums returning to the UK top 40; proof, if any were needed, of her enduring artistic legacy.

In my musical universe Kate Bush performing live is about as big a deal as it gets. This is an artist who I’ve idolised for decades; whose music has inspired, challenged, consoled, healed and sustained me. This is a moment I’ve longed for throughout my entire adult life, even fantasising about what it might be like, but had almost given up hope of ever seeing. Even now, sat in the stalls of the famous, recently refurbished old venue with two of my best friends I can scarcely believe that it’s happening. And I have absolutely no idea what to expect.

The lights dim and the sage words of Lily Cornford reverberate around the London venue. When Kate emerges, stage left, barefoot and black clad followed by her backing vocalists the whole place, to a last man and woman, rises to their feet and cheers. ‘Lily’ is a spiritually and psychologically powerful opener, both introduction and invocation entwined.

For the first few songs I find it hard to grasp what I’m seeing, trying to comprehend that it’s actually Kate Bush up there and almost afraid to look away in case it turns out not to be real. Her voice is slightly deeper but remains extraordinarily thrilling, expressive and strong. Kate looks happy and at ease. If she’s nervous then there is absolutely no sign of it. The reaction of the audience is extraordinary too, they cheer and applaud each song not just at the end but at the beginning also, sweeping each musical experience into their collective arms and embracing it like a lover or a long lost friend.

‘King Of The Mountain’ gathers energy as it whips up a mighty storm and culminates with a huge thunderclap that plunges the Apollo into darkness, save for percussionist Mino Cinelu in a spotlight whirling a bullroarer around his head. As canons fire thousands of pieces of amber coloured paper into the audience – each bearing a quote from Tennyson’s ‘The Coming Of Arthur’, a lovely bit of attention to detail – the evening shifts abruptly in an entirely different direction. 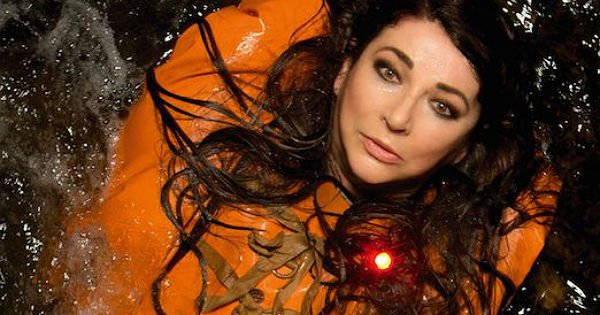 ‘The Ninth Wave’ from 1985’s Hounds Of Love album is a beautiful, thrilling, disturbing, compelling and utterly magnificent piece of music that tells the story of a woman alone in the ocean at night, awaiting rescue, drifting in and out of consciousness. Following a short filmed piece which sets up the back story the stage is completely transformed; lasers and billowing fabric create the illusion of rolling waves as horrific “fish people” with skeletal heads close in. A video screen at the rear of the stage shows Kate, alone, floating in a dark ocean. She sings the opening line of ‘And Dream Of Sheep’ and I realise that she’s going to perform this astonishing piece of music in its entirety. All the pent-up emotions inside of me come rushing out of me and I burst into tears.

Rescue workers scour the stage during ‘Under Ice’ as a ghostly Kate moves unseen among them, observing herself trapped beneath the frozen surface. The superb surround sound system installed for these shows really comes into its own during the dramatic ‘Waking The Witch’ and concludes with a huge lighting rig zooming over the heads of the audience, belching out smoke and strafing the crowd with searchlights looking for the missing woman. ‘Watching You Without Me’ is pure musical theatre; a living room scene between father and son into which Kate suddenly appears. When she realises that her loved ones can neither see nor hear her it’s a heart-breaking moment.

‘Jig Of Life’ is ancient, urgent, primal, the first sign of hope on the horizon though no less unsettling; the spirit of the future urging the present self to live. During ‘Hello Earth’ Kate clings to the apparent safety of a giant buoy, only to be prised away by the fish people who carry her body slowly, serenely, like pallbearers away from the stage, down the aisle and out of the auditorium as the drowsy choral voices beckon the woman to surrender to the enveloping deep. With all eyes fixed on Kate not everyone notices the final image on the video screen: a woman’s arm reaching out of the water, clasped by a rescuing hand…

The joyous ‘The Morning Fog’ provides catharsis and a tangible emotional release but still inspired half time debate: does the woman drown and awake to a purer love, reunited with loved ones in the afterlife or does she survive with her awareness and appreciation of life heightened by the experience? For me there is only one answer but, deliciously, Kate leaves it open to interpretation.

The second half transports us from sea to air with ‘A Sky of Honey’, an abstract but no less enthralling piece beautifully staged against a gorgeous ever-changing backdrop that moves from a moonlit winter wood of silver birch trees to a glorious summer afternoon, crimson sunset, violet –hued twilight, resplendent starlit night and back again.

The role of the painter on the album (played on stage by Kate’s son Bertie) is developed further and he becomes an almost Pan-like figure, creating the sky and orchestrating the events onstage. Integral to the piece too is a child size -and childlike -wooden puppet that wanders onto the stage during ‘Prelude’, curiously observing the musicians and the painter, who gets caught up in the events as they unfold.

Musically ‘A Sky Of Honey’ is full of light and space; lingering moments of natural beauty traced through the arc of a day; from the gliding, graceful ‘Prologue’ to the rhythmically hypnotic ‘Nocturn’ via the dusky sensuality of ‘Sunset’. ‘Tawny Moon’ is a new section in which Bertie paints the sky with stars whilst his Mum is quite probably the only person who could stand on stage replicating birdsong (‘Aerial Tal’) and render it utterly enchanting.

‘Aerial’ brings the song cycle to a chaotic conclusion and finishes with the band wearing macabre bird masks, trees crashing through the piano and the stage and Kate as a one-winged blackbird swooping over it all. Not your typical rock concert then!

Kate returns for a soothing and achingly beautiful solo rendition of ‘Among Angels’ before the band join her to end the show with the majestic ‘Cloudbusting’. Peter Reich’s ‘A Book Of Dreams’ may be unlikely subject matter for a mass crowd sing-along but it’s a unique and wondrous way to end a concert -but then Kate Bush is a unique and wondrous artist.

As a lifelong fan I’ve often tried to envisage what a Kate Bush concert might be like, but this astonishing three hour spectacle went way beyond anything I could have imagined. Far more than just a gig this was an incredible experience to be savoured and treasured.

Brilliant in its staging, breath-taking in its imagination, intensely moving in its content and, for me personally, quite literally a dream come true: ‘Before The Dawn’ was simply magical.

Set List – Part One:
Lily
Hounds Of Love
Joanni
Top Of The City
Never Be Mine
Running Up That Hill (A Deal With God)
King Of The Mountain
The Ninth Wave