The popular death metal mantra of ‘no clean singing’ was taken to whole new levels at the muggy Asylum 2 where half of the four-band bill barely sang at all. There was quite an eclectic feel at the Birmingham club with a varied line-up of acts rather than all four bands fitting neatly into the same pigeonhole.

Let’s start with local boys Moghul. When the band announced at the off that they were there to play just the two songs you suspected they weren’t going to be a two-minute Napalm Death type frenzy. And they weren’t… Moghul proceeded to play out an atmospheric heavy crushing rhythm that showed off their accomplished fret skills.

As the opening song continued to weave its way into the consciousness of the Asylum early birds the guitarist, sporting a highly impressive head of dreads, started fumbling around with plugs, cables and amps. The remaining trio soldiered on regardless even when the dreaded one left the stage in search of new cables and plugs. Returning a minute or so later with the first song still swinging along he was forced to retreat once again, problem unsolved, with a resigned shrug of the shoulders.

Another minute passed before he returned, and yes the opening song was still in the air, with a whole new amp. Finally plugged in and with a rye smile he joined in the final minute before all four Moghul members successfully navigated their way through their second, and final, song. The purely instrumental opener was followed by sporadic vocal interventions on the second number but Moghul are all about the vibe, a psycho-laden barrage of rampant black riffs.

Next up were one of Birmingham’s brightest bands at the moment, Alunah. It is with a degree of hesitation that I brand these doom fiends as ‘bright’, but some of their uplifting melodies and weighty deliveries have the spirit and ambience that makes your spine tingle. Vocalist Soph has a natural presence and easy charm that transmits well to the audience with opener ‘Call of Avernus’ immediately persuading a few more in the crowd to take a couple of steps forward.

This was the first Alunah gig for new bass player Dan but such were his confidence levels that he appeared to slot seamlessly into the line-up. The Brummies have been busy across Europe playing to some big festival crowds but being knocked off your feet by their blackened waves of despair within the intimate surroundings of the Asylum 2 allows you to get a hot blast of their incessant crushing power at close quarters.

Raw emotion drips through the pores of ‘White Hoarhound’, with Soph’s voice at its bleakest, while Alunah’s customary ice-crushing closer ‘Belials Fjord’ is a smouldering beast that bares its teeth and fixes its gaze directly onto your soul like a blackened demon.

Following the two Birmingham based openers onto the stage were Desert Storm, a southern soul fried swamp crew from Oxford. These fellas were the liveliest bunch of the night with a satisfying sludge sound which seemed to get heavier the more they played.

Vocalist Matt has a naturally earthy voice that croaks when he talks as well as sings and the powerful rhythm section cut grooves into the air with some mammoth rasping riffs. Desert Storm certainly gave a good account of themselves at the Asylum raising the tempo nicely before Karma To Burn stepped up. 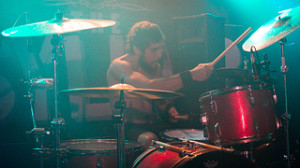 K2B – as they are usually known – are currently performing as a double act and with a sense of irony took the stage following the intro of Bill Withers’ R&B anthem Just The Two of Us. This double act are now functioning as a purely instrumental two-piece and as such provide something of a novelty as a headline act without vocals on a four-band bill.

Guitarist Will Mecums and drummer Rob Oswalds have continued to perform since the recent departure of bass player Richard Mullinses. The West Virginia pair quickly dispelled any doubters with a succession of stoner-style riffs, moving from slower numbers to heavier thrash but maintaining a punchy fluid momentum that could only be improved on by necking from a bottle of Jack while listening.

While almost impossible not to bang your head once this pair get going, long-term you feel the introduction of a new singer can only be a good thing for the future of K2B.

All in all a pretty staggering kind of night at the Asylum 2, well appreciated by a hardy crowd who really understand their music.