Step aside Fireman Sam because Kamelot are in town tonight fronted by Sweden’s Tommy Karevik who when away from his musical work is possibly the rock world’s only full time fire-fighter. He would certainly have felt at home in the hot environment, with torrents of dry ice blasting from the stage at every opportunity, to showcase what an awesome live band they have become since he joined the ranks in 2012. As part of the second leg of ‘The Shadow Theory’ tour they headlined a three band bill that was kind of a throwback to the days when bands toured together and tried to play each other off the stage. The sold out venue was treated to some performances that simply oozed the spirit of what makes rock music so special.

A wave of enthusiasm radiated through the venue as openers Visions Of Atlantis bounced onto the stage to kick off proceedings. With a wall of sound pinning everyone’s ears back we had a brief taste of some galloping rifferama based symphonic metal fronted by the delectable soprano voice of Clémentine Delauney and her partner in crime on vocals Michele Guaitoli. Comparisons are always going to point directly to the likes of Lacuna Coil because of the lead female/male vocal delivery but numbers such as the title track from their latest album ‘The Deep & the Dark’ showed tonight a closer fit to the sound that Nightwish have made their own. Sticking to their tight schedule the highlights were ‘Return to Lemuria’ with its rocking melody and the tranquil sweet sounds of the melancholic ‘The Last Home’ where Delauney had the opportunity to connect with the audience through her emotional delivery. They may never reach the levels of major venue headliner status but anyone looking for a first taste would have been left feeling the band are intriguing enough to command further attention.

The sinuses were well and truly cleared with the arrival of Evergrey as the bone crushing progressive metal sounds of ‘A Silent Arc’ flowed from the speakers like molten lava. Heavy and dark riffs with pounding bass lines reverberated across the venue from the Swedish dark metal lords. Founding member Tom S Englund has a gigantic presence as he delivers his anguish ridden vocals encouraging the citizens of Birmingham to embrace the sonic forces being delivered. Translating their recorded music to the stage lifts the power and aggression to another level with ‘Weightless’ and ‘Distance’ creating a rasping blast of melodrama. There was very little subtlety but it could be found hidden in ‘All I Have’ with its hypnotic delivery and awesome guitar solos. Set closer ‘King of Errors’ was as good a finish as you could hope for. With its Queensrÿche Operation Mindcrime style opening the song was crafted to deliver maximum atmosphere and feeling. The chugging guitars of Henrik Danhage and Englund turned this opus into a masterpiece with the crowd chanting along throughout. What stood out tonight was a band pumping out great music without the need to deviate into the growling vocals that often spread through this type of music like a virus. It was time to be rushed off to the Emergency Department for some serious resuscitation after this set!!!! 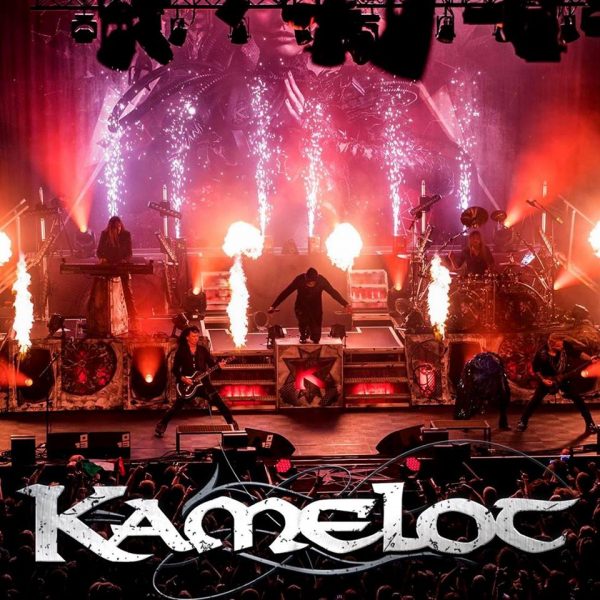 The shock waves created when Kamelot hit the stage were like a sonic boom. From the moment ‘Phantom Divine (Shadow Empire)’ kicked off with its pulsating hypnotic rhythm the audience could feel a vibe radiating from the stage. Tommy Karevik is dressed like a heroic lead character from Star Wars and with his choreographed stage presence he gets the whole venue to respond by giving their all on the likes of ‘Rule the World’ and ‘Insomnia’. With the music channelling emotion the place was rocking with the gathered singing along in unison to the infectious choruses being delivered. As Karevik breezed up to the stage front he was greeted with some serious screams and let it be said this is no boy band!!

Thomas Youngblood (guitar) formed the band back in 1991 and it would be hard to believe that all these years later he can believe the adulation that he still gets not only in Birmingham but at venues across the globe. Adding to the drama and dynamics he continually steps forward to deliver the requisite power metal riffs turning numbers like ‘End of Innocence’ into symphonic metal delights. With his flowing long locks of braided hair Sean Tibbetts on bass was Mr Action personified all night barely pausing for breath as he swivelled his instrument like a machine gun spraying out killer notes.

Constantly clouded in a fog of dry ice they continued all evening to tick the right boxes with the obligatory metal posing. Lauren Hart, vocalist of death metal band Once Human, frequently joined Karevik on dual vocals with her ear piercing voice and she was seriously raising male testosterone levels as she prowled around the stage. Digging deep into their entire catalogue songs such as ‘March of Mephisto’ and ‘Center of the Universe’ put a real smile on the face of rock by slamming everyone in the face with some crushing energy and catchy riffs.

The men in suits continue to argue that there is no market for bands like Kamelot. Just tell that to those in attendance tonight who resolutely refuse to take notice of such musings. Approaching the final stretch Clémentine Delauney joined the band to add some fresh impetus to ‘Sacrimony (Angel of Afterlife)’ and Birmingham really did make some noise as the visual experience concluded with the triple play of ‘Amnesiac’, ‘Forever’ and ‘Liar Liar’.

With the band sounding as tight as the proverbial and a faultless frontman conducting events the immensely loyal fanbase had been brought to the brink of hysteria having been rewarded with what will be one of the best rock shows 2019 will see. Leaving the venue with ringing ears it is good to see that with so many of our heroes hanging up their instruments this year the future of rock music is in good hands