One of the great sides to the Internet is it opens you up to so many more opportunities to hear bands mainstream media or record labels don’t expose you to. The down side is because there is so many bands out there it is also very easy for bands to fly under your own personal radar, for me JoyFocus are one of those bands, indeed if the band hadn’t gotten in touch with me I would still be unaware of them.

Essentially a duo Rikk and Holly Currence have been making music together for some time and this their latest album Random Access Digital Audio Hersey is a little gem and I’m so glad I got the opportunity to hear and enjoy it. Calling these guys, a pop-rock band is only the tip of the iceberg and does their overall sound a little injustice as they are not as flimsy or throw away as that genre title implies to the average rocker. There are strong alt rock touches that modernise their sound that gives them a little edge whilst not neglecting the highly melodic and polished, hook filled songs in the process.

Holly’s vocals veer more towards pop in their lighter and more melodious tones and style – than you would expect from the gruffer more booming rock vocalist. I have really taken to Holly’s voice and there is ample opportunity throughout the album to showcase her voice and she has created some extremely beautiful vocals that I have totally gone head over heels for. What Holly may lack in power she more than makes up for in beauty and emotion, which to be honest is much more to my tastes.

It’s a short album at eight tracks long, but to quote that most overused of quotes it’s all killer no filler and for me every song packs a punch with the overabundance of hooks thrown at us and the songs really get stuck in your head.

Rikk’s guitars are much heavier than you’d expect from your average pop-rock act but they are never aggressive or obtrusive they just add power to the songs impact and give the songs more of an alternative taste.

For an Indie release the production is great and as songwriters they throw everything into the mix including string’s and keyboards. Really filling out their sound giving everything a lush and polished and well produced feel. Anyone who knows me knows I prefer the smoothness and rich feel of a song that fills out its sound with lush melodic soundscapes. If you like your music raw and minimalistic, these guys aren’t for you.

I find comparison’s hard, whilst it is obvious in their sound they have strong Eighties rock influences I would also say they have lots of Eighties pop influences given their song structures and lush soundscapes. Vocally I hear some Pat Benatar in there and musically No Doubt for the slight alternative vibe to many of the songs. They have retro influences but JoyFocus have a very fresh and enjoyable sound all of their own.

Random Access Digital Audio Heresy is a really easy album to like it’s full of instant songs that hit you hard and fast, leaving a lasting impression which will lead to many repeated plays! If like me you’re a fan of pop/rock and female vocalists in general then this is an essential listen, so what are you waiting for go find JoyFous on the ol’ Tinternet, buy it and enjoy! 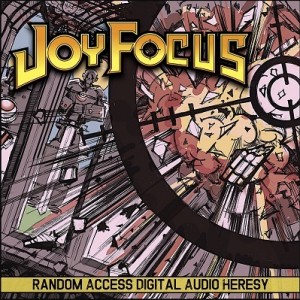