“Is it possible” asks rock ‘n roll duderino Jon Spencer in the pre-release blurb for ‘Spencer Sings The Hits’, “to torch the cut throat world of fake news and pre fab, plastic-coated teen ennui with the cold, hard facts of rock ‘n roll?”. Who knows, frankly. But if anyone can it’s ex Blues Explosion/Boss Hog/Pussy Galore mainman Spencer and this, his first solo album, is his freakin’ noisy midterm manifesto.

He kicks off with ‘Trash Can’ – a prime slice of high-gloss, lo-fi Spencer. It’s a gloriously fuzzed up, fucked up start, chock full ‘o trash deluxo guitars, huge dirty bass and semi industrial clang. It’s restless and strung out and who, after all, wouldn’t want to do the Trash Can (plus the above video is perfect for this All Hallow’s Eve).

From here on in we’re off and running. It’s everything you’d expect from Spencer but with a very slight twist. Yes it’s gloriously trashy and noisy – squonk and controlled feedback abound – but the production is slicker, there are electronic and industrial hints to the flavour, it has a weird kind of gonzo sheen. It also feels slightly more autobiographical than we’re used to from Spencer, it’s a grubby window into his cigarillo and cheeseburger ruined soul, a state of the nation address.

Therefore you can guess what his target is on ‘Fake’…”Your shit is fake, honey I’m here to warn ya”. It’s an industro blues with an insistent, menacing clang – pounding insult garage rock with B-Movie lyrics which can trace its lineage back to ‘Hound Dog’.

We have distorted frameworks, trashy keys, earthquake drums and attitude aplenty, it crackles, fizzes and drips overloaded distortion. ‘Beetle Boots’ is 2 minutes of delinquent B-52’s while ‘Ghost’ again is ideal for Halloween, full of crashing, snarling guitars and cheesy Hammer horror keys. Spencer dons his best Elvis jumpsuit to tell us that “baby, baby, I’m a ghost”…a ghost very much enamoured of ‘Exile On Main Street’.

There’s plenty of funk and three-chord rockabilly disco soul. ‘Love Handle’ is foul mouthed alien 50’s greaser groove (and no one does swears better than JS), what goes on in this guys head? The title track offers us prime gibberish laid over some flat-out-stone-cold 3 chord riffola. ‘Alien Humidity’ is Elvis’ conspiracy theory addled and pilled-up brain put to music, it hangs out in dark alleys, broken bottle in hand…

We end with the fucked up Duane Eddy twang of ‘Cape’ (Link Wray and Iggy are in here somewhere too) – JS volunteering to be our superhero (“who else can rock a cape?”) and why not? He’s the hero we need and deserve in these times.

And there we are, 12 tracks and 32 minutes of the devil’s lounge act, trash aesthetic glory. It’s a tad more controlled than JSBX (whose ‘Now I Got Worry’ was one of the finest slices of greasy r’n’r abandon since the aforementioned ‘Exile’) but in a weird, noisy way. Weird. That’s the operative word here. We need more weirdness…and Spencer’s the man to bring it.

Released on 2 November 2018 by In The Red Records 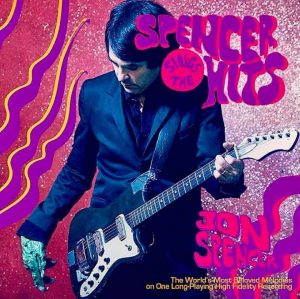