Too long brushed aside and forgotten among rock history’s footnotes…

History tells us Concerto for Group and Orchestra by Deep Purple and The Royal Philharmonic Orchestra was a misstep in the former’s career trajectory, best ignored in favour of In Rock whereupon the Mark II version of the band built their heavy rock foundations.

Only, they apparently did it again in September 1970 at the Royal Festival Hall, this time playing Jon Lord’s Gemini Suite. Blackmore and Gillan it would appear were happy to take their money for that live performance but were in agreement, at least back then, that it shouldn’t be a Deep Purple record. Thus Mr Lord became the first member of that illustrious many-membered band to have a solo career, one running simultaneously with his one in the group. Back then music career advisors declared you weren’t supposed to, it being a few more years until every member of Yes would trundle out their solo efforts, but the old Purple management liked to expand their brand; especially if it did the coffers good. Fortunately, in the case of Gemini Suite the results were rather fine too.

The year after its live performance, Lord went into the studio with Purple rhythm section Roger Glover and Ian Paice, former Heads, Hands & Feet guitarist Albert Lee prior to him becoming part of Emmylou Harris’s Hot Band, Tony Ashton (before having a hit with ‘Resurrection Shuffle’ in Ashton, Gardener & Dyke) who Lord would continue to collaborate with over the years, and Yvonne Elliman who played the part of Mary Magdalena in both the film and original sound recording of Jesus Chris Superstar (as did Ian Gillan of course), scoring a hit with ‘I Don’t Know How To Love Him’ before an early disco career and performing a significant vocal role in Eric Clapton’s band.

The rock band personnel changes however were of lesser importance. What’s immediately apparent on listening to the album is that replacing the Philharmonic with the London Symphony Orchestra and it being conducted by Oscar winner Malcolm Arnold paid in dividends. Whether it was simply a brief passage in time where high and low brow cultural differences became less significant, it being recorded in a studio rather than capturing a live performance, or genuinely the talents themselves, you cannot deny they blend excellently even if you’re not fond of the actual music.

Remastered by Rob Cass from original Abbey Road mixes the sound throughout is clear. It is also of its time, floating between those original Brit-beat rock sounds of the 60s waiting for the 70s to go ape and sympathetic orchestration offering an overall hi-fidelity ambiance. Rather than songs or themes each track is titled by the main soloist of the piece and first up is Albert Lee. Renowned for his hybrid country-picking style he’s not the most obvious choice on paper. However, it shouldn’t be ignored that he’d traipsed round the same session stomping grounds as Blackmore and Purple Mark I weren’t averse to having rounding out an elpee with the likes of ‘Kentucky Woman’. As for the track itself it’s an evolving melody line between Lee’s guitar and the orchestra, with some big booming kettle drums in evidence, acting as overture. As Lee plays through an echo chamber a blues section ensues, bass guitar coming in and for no more than a couple of bars it sounding like Black Sabbath’s ‘Warning’, with syncopated twanging and pinched notes heard through various moods it’s an effective pleasant workout.

The first of two Jon Lord solos has him featured on piano and while the orchestra again work in syncopation it is Ian Paice’s brushed drumming that really adds flavour as the Purple pair deliver a lovely jazz flavour to proceedings. Drum solos themselves tend to be for the drunk and demented, or drummers themselves (many of the old school variety falling into the former category), here it works because the orchestra are heavily involved and it’s more the fact that we’re impressed by Paice’s rolling fills, moving on from the former jazzier piece featuring Lord edging towards the big band flavour that would be featured at the fall of the decade when they formed Paice, Ashton & Lord.

A major change comes with the addition of vocals for the next number, and as the strings and brass stir and Elliman sings her first line I recognise this as being featured on side 2 of Lord’s next album Windows, which I’m familiar with. That album is live however and the orchestration here is less robust and brash, and it would appear Elliman has been chosen for the meeker, more mild vocal approach she would gently serenade us with on Jesus Christ Superstar, it contrasts with the bluesy rasp and bellow of Ashton who takes over the next verse (as he does live on Windows) and they blend surprisingly well on the final section.

Respect for Roger Glover tends to be for his co-writing and production skills rather than as a bass player but his solo proves to be a compositional joy. A dramatic jigging rhythm is played alongside the orchestra who then briefly withdraw as a pseudo-Holst movement ensues from Glover who plays precise and clear, becoming more profound, presumably applying an echo chamber at one point to give the impression of two basses. It stands out well while working within the context of the overall album.

The final section, rightly taken by Lord himself has the keyboard player/composer grooving on organ. Moving from big Hollywood western themes with the orchestra to jazz and boogie and proto prog, the band as a whole at work during a chilled blues section where again Paice’s drumming supporting Lord’s organ demonstrates how well they worked together, and it all building towards a satisfying classical finale.

Contemporary with the early work of Emerson, Lake & Palmer but with superior arrangements here, while very obviously pointing the way for a band like Focus and by proxy decades later Metallica, Jon Lord’s Gemini Suite proves to be not only a successful combination of rock band and orchestra but a pleasurable experience aurally too. Too long brushed aside and forgotten among rock history’s footnotes, give it a try. 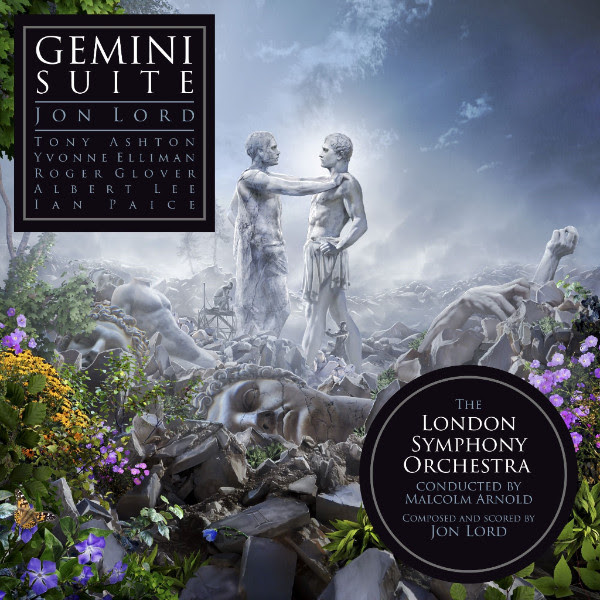