Formed in Plovdiv, Bulgaria in 2007, John Steel take their name from lead guitarist and driving force Ivan Stalev (“John Steel” is the English translation of his name). Throughout their career they’ve attracted some of metal’s most respected vocalists and their latest album, Distorted Reality finds none other than David Reece (Accept) taking centre stage. The band’s first two albums are included with this release: 2014’s Freedom (with Blaze Bayley) and 2017’s Everything Or Nothing (featuring Doogie White). This two disc set brings together all the band’s recorded output for the very first time, which makes Distorted Reality an essential purchase.

John Steel don’t mess around, and their latest album Distorted Reality gets straight down to business with opening shot ‘Black Demon’. This is a steamroller of an introduction that crushes all in its path and features all sorts of guitar pyrotechnics from the tag team of Ivan Stalev and Victor Georgiev. The pair have been ever present through the band’s history and display an obvious chemistry, but its vocalist David Reece who steals (pun intended) the show. Those who only know David from his tenure in Bangalore Choir and Bonfire might be surprised at his performance here, yet the hard-edged sound of John Steel suits his honey-soaked voice perfectly, and if you need proof, a cursory listen to ‘Dante’s Retribution’ will set you straight. This is heavy metal at its most celebratory, and (like most of this album) it races along at a furious gallop with David’s voice floating majestically and rising and falling with the neo-classical guitar lines.

I hope I haven’t made John Steel sound like a one-trick pony because there’s plenty of variety on offer here and the power ballad ‘Messiah’s Day’ injects a nice change of pace as it evolves from acoustic number into beauteous beast. However, it’s metal meltdown that John Steel do best and ‘Rise From The Dead’ recalls classic Judas Priest (on steroids) insofar that it’s hard-as-nails, yet hook laden and melodic, and the two combine to create a foot-on-the-monitor, horns-held-high metal fest. The eternal battle between good and evil is the thread that stitches Distorted Reality together, and they’re pulled tighter on the epic ‘Fallen Angel’. It’s a closer that’s almost progressive in nature as it shape shifts towards an ominous conclusion and, as the final notes ring out, it’s obvious that the collective known as John Steel are confident they’re at the peak of their powers.

Travelling back eight years we find ex-Iron Maiden/Wolfsbane singer Blaze Bayley at the helm for 2014 effort, Freedom. It’s a record that doesn’t sparkle with the same panache as Distorted Reality yet comparing the two is rather unfair; the new album has a bigger budget and benefits from a core line-up who’ve been playing together for several years. At a mere 29 minutes, Freedom is a fairly brief listen and one that feels over before it really starts; it leaves you hungry whereas Distorted Reality made you sated. ‘War’ is a rather strange opener that contains a tangle of voices which only serve to confuse the listener and, where time is of the essence, it seems a frivolous waste of two-and-a-half minutes.

The traditional form of heavy metal that John Steel ply has drawn favourable comparisons with Iron Maiden and that correlation is even more evident now that Blaze is at the mic. Freedom really gets into gear with the title track, a song that could have been pulled from Maiden’s Virtual XI album, and it’s only the rudimentary production that prevents the band from causing serious carnage. Freedom features contributions from three different guitarists, yet it tends to put riff over solo and subsequently songs such as ‘Change’ and ‘The Crow’ tend to chug along at a similar pace and Freedom rarely gets out of second gear. There’s some flashy solos peppered throughout (such as those which tail ‘Nightmare’) but it’s not until the finale ‘Evil Sky’ that the band let fly, and a few more rockers like this would have made a more rounded effort (note: this issue doesn’t contain the bonus tracks that appeared on the original disc). Certainly not a bad album, Freedom sounds slightly lackadaisical when listened to straight after Distorted Reality.

For 2017’s Everything Or Nothing album Scottish singer Doogie White replaced Blaze Bayley as vocalist, and it was a move that marked a fresh start for John Steel. The introduction of keyboards added texture to their sound alongside a light and shade they would develop further on Distorted Reality and this is immediately evident on the opening couplet. The imaginatively titled ‘Intro’ is a light and airy number, so much so that you feel it might float away and this litheness is juxtaposed with the crushing swing of ‘Creator’. There is a reason why Doogie has such a rich CV (credits include Michael Schenker’s Temple Of Rock, Rainbow, Alcatrazz) and he certainly makes his presence felt on this recording. With a personality that matches his pipes he turns in an emotional performance and breathes life into tunes such as ‘Forever And Always’ and elevates the album several notches by dint of his presence.

Those trad metal influences are still present on Everything Or Nothing, as are the allusions to Iron Maiden (Doogie auditioned for Maiden but was usurped by Blaze) but this album is the sound of a band coming into their own and developing a signature style. You can hear a real development from Freedom and songs such as ‘One God’ encapsulates all that’s great about heavy metal from the hard hitting rhythm section to the blistering guitar solos and, of course, Doogie’s soaring vocals. If any song deserved to be played in a huge arena with thousands of lighters/mobile phones held aloft then it surely is ‘Spirit Lies’. It’s a shame that this was the only album that Doogie and John Steel collaborated on because they certainly bring out the best in each other, and especially on the epic ‘Emperors New Clothes’. Two semi-acoustic tracks featuring Dillan Arnaudov close the album, but they sound a tad feeble are the fire of brimstone of Everything Or Nothing yet they can’t temper the album’s strength.

You’d think a collection of albums featuring three of metal’s best vocalists would overshadow John Steel somewhat, yet it’s to the band’s credit that they more than hold their own in such illustrious company and in doing so they’ve produced three sensational albums. 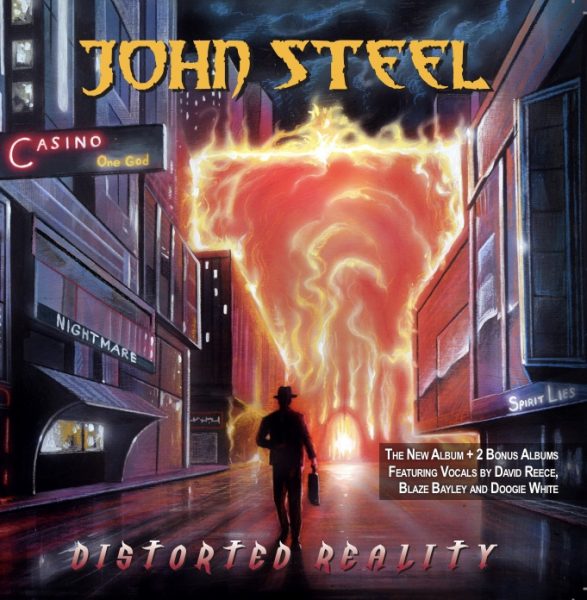