Chill out music…with an edge

This album, released by Sacred Bones Records 15 April 2016, was busted out of Manhattan maximum security penitentiary by Gary ‘call me Snake’ Cordwell

Ok, granted, this album may be a curveball for The Midlands Rocks but stick with it. Yes, it is that John Carpenter – the horror movie maestro – he of Halloween, The Thing, Escape From New York. He of the unforgettable, self-composed soundtracks, recorded on a shoestring on synthesisers. His ominous, spare scores becoming hugely influential in the worlds of both soundtracks and electronica. I mean c’mon, who can forget (and not be spooked by) the intro to ‘Halloween’?!

His focus of late seems to be his music. He came out of his self-imposed, NBA and video game exile to release last years ‘Lost Themes’ – a new collection of music to accompany movies that never existed. It was brilliant, vintage Carpenter…and an unexpected hit. The genesis of this, it’s sequel, is subtly different. Again Carpenter is joined by his son Cody on synths and his godson, Daniel Davieson, on guitar. But this time, rather than writing and recording remotely over years and sharing files on t’interweb, the three collaborators were in a city together with a tight schedule. The result being that this release has a looser, more organic feel.

Opening track ‘Distant Dream’ follows on from where ‘Lost Themes’ left off – a deep blast of synth and into a typical Carpenter intro. Minimal, throbbing and pulsing – B movie images flash onto your minds eye. And then real drums enter the fray, giving the whole thing a warm, live feel. The remainder of the album has an airier, lighter feel. Still unmistakeably Carpenter, but more relaxed. Several tracks are almost ambient, full of twinkling keys and synth washes. There is more guitar in the mix too, giving several songs an 80’s soft rock vibe which will translate well live. His knack for an instant melody brings John Barry to mind, if he’d dabbled in electronica! You can almost see Kurt Russell dropping his guns, walking away from a scene of carnage.

The fuzzed up guitar riff of ‘Dark Blues’ calls to mind his ‘Escape From LA’ soundtrack – still essential Carpenter, but on a bigger budget. But the overall mood here is definitely clamer. Poignant, euphoric and yet still unsettling – a sunlit, post-apocalyptic calm…shell shocked survivors shuffling through the desolation.

Carpenter has chosen a good time to get off his sofa. Musically and culturally his stock has rarely been so high. He has influenced entire genres of music – Dark Ambient and most certainly Synthwave, a whole musical style virtually single handedly based on his 80’s scores, one of it’s most revered bands being Carpenter Brut! Disasterpeace’s ‘It Follows’ soundtrack is pure Carpenter while ‘Tomorrow’s Harvest’, the brilliant 2013 album by Boards Of Canada is also a soundtrack to an 80’s schlock movie that was never made and could well have been written by the man himself. Anyone who grew up during the early 80’s video boom will have this mans music imprinted on their psyche and ‘Lost Themes II’ is a more than worthy addition to his cannon. Chill out music with an edge. Enjoy with a glass of good wine. 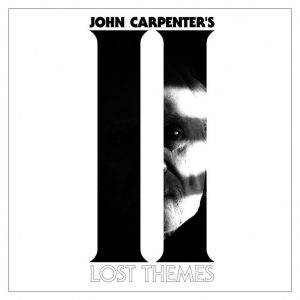